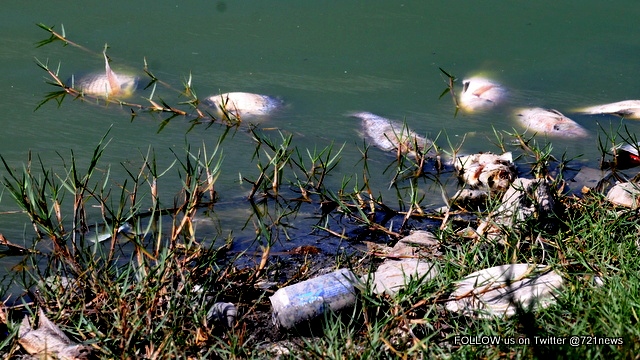 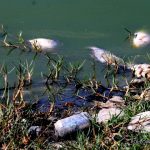 The St. Maarten Nature Foundation tested water quality at the Firgos Channel in order to determine the reason for the mortality of Trachemys scripta elegans and Tilapa spp at the Location of the firgos channel

Samples were collected using standard sampling vials. Once collected the samples were tested for the various levels within 24 hours using the LaMotte Water Pollution testing kit (figure 2). Once levels were measured the data was recorded and stored. pH levels and water temperature were tested using the Oakton Acorn Series pre-calibrated pH meter. Similarly the Salinity was measured using an Oakton Salinity Meter

A note on Accuracy:

The parameters researched using the LaMotte water quality testing kit are accurate to 0.01 ppm which reflects a high level of accuracy. The same accuracy applies to the Oakton pH, temperature and salinity measures. Measurements of Faecal Coliform showed only a presence or absence value and not the precise levels present. 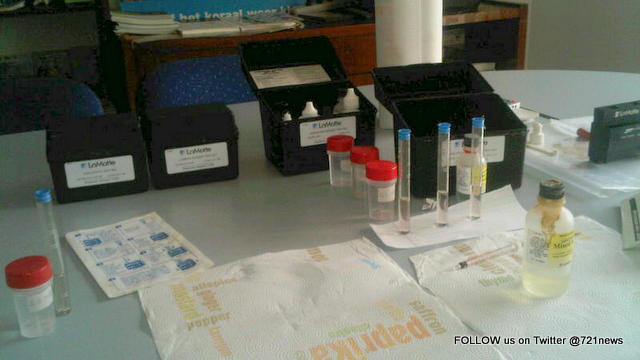 Sampling water was done with great care in order to avoid cross contamination and a skewing of results. Sampling vials were rinsed with the to be sampled water at least five times to remove any previous contaminants. Water samples were taken right below the surface through submersion of the sampling vial. Dissolved oxygen, Salinity, pH, turbidity and temperature were tested and other parameters were tested in the Nature Foundation Offices.

Follows are the results gathered from the water quality tests:

Sewage is the main source of nitrates added by humans to wetland areas. Sewage enters waterways in inadequately treated wastewater from sewage treatment plants, in the effluent (outflow) from illegal sanitary sewer connections, and from poorly functioning septic systems. Water containing high nitrate levels can cause a serious condition called methemoglobinemia, if it is consumed. This condition prevents an infant’s blood from carrying oxygen; hence the nickname “blue baby” syndrome.

Based on research conducted it was determined that the site showed relatively high level of nitrates considering the norm of less than point two parts per million >.2. The level tested showed a level close to .4 ppm

Phosphorus is usually present in natural water as phosphates (orthophosphates, polyphosphates, and organically bound phosphates). Phosphorus is a plant nutrient needed for growth and a fundamental element in the metabolic reactions of plants and animals (hence its use in fertilizers). Sources of phosphorus include human and animal wastes (i.e., sewage), industrial wastes, soil erosion, and fertilizers. Excess phosphorus causes extensive algal growth called “blooms,” which are a classic symptom of cultural eutrophication and lead to decreased oxygen levels in wetlands.

Based on research conducted it was determined that the site showed a relatively high level of phosphates considering the norm of less than point two parts per million >.2. The level tested showed a level close to .4 ppm

Based on research conducted it was determined that the site showed a relatively high level of nitrogen considering the norm of less than point two parts per million >.5. The level tested showed a level close to 8 ppm

Dissolved oxygen analysis measures the amount of gaseous oxygen (O2) dissolved in an aqueous solution. Oxygen gets into water by diffusion from the surrounding air, by aeration (rapid movement), and as a waste product of photosynthesis.

Total dissolved gas concentrations in water should not exceed 15 ppm. Concentrations above this level can be harmful to aquatic life. Fish in waters containing excessive dissolved gases may suffer from “gas bubble disease”; however, this is a very rare occurrence. The bubbles or emboli block the flow of blood through blood vessels causing death. External bubbles (emphysema) can also occur and be seen on fins, on skin and on other tissue. Aquatic invertebrates are also affected by gas bubble disease but at levels higher than those lethal to fish. Inversely gas levels should not go below 5 ppm, which can show a lack of oxygen and can cause fish die-offs and algal blooms.

Based on research conducted it was determined that the site showed an unusually low level of dissolved oxygen considering the norm of approximately seven parts per million (7 ppm). The level tested showed a level close to 2 ppm

A range of pH 6.5 to pH 8.2 is optimal for most organisms. Most organisms have adapted to life in water of a specific pH and may die if it changes even slightly. The toxicity level of ammonia to fish, for example, varies tremendously within a small range of pH values. Acidic water can cause heavy metals such as copper and aluminium to be released into the water. Copper from worn automobile brake pads is often present in runoff. Rapids growing algae remove carbon dioxide from the water during photosynthesis, which can result in a significant increase in pH levels.

Based on research conducted it was determined that the site showed an unusually low level pH considering the norm and temperature. The level tested showed a level close to 6. 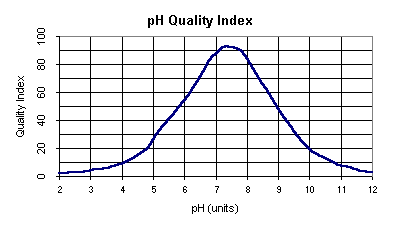 Increased levels of faecal coliforms may provide a warning of contamination with pathogens due to contact with faecal matter found in sewage run-off which may include contact with the faecal material of humans or other animals. Faecal coliform enters the Environment mainly through human sewage, either from runoff or direct seepage or introduction from sceptic holding tanks.

Some waterborne pathogenic diseases that may coincide with faecal coliform contamination include ear infections, dysentery, typhoid fever, viral and bacterial gastroenteritis, and hepatitis A. The presence of faecal coliform tends to affect humans more than it does aquatic creatures, though not exclusively and can still be harmful to the environment. Aerobic decomposition of this material can reduce dissolved oxygen levels if continuously entered into the environment. This may reduce the oxygen level enough to kill fish and other aquatic life. The unit of measurement which was used during this study was related to a simple Presence/Absence (P/A) scale, with a positive test having a P-vale and a negative test an A-value. The tested location showed a Presence (A-Value) of Coliform in the tested water.

When samples were taken at the tested location no avifauna, fish or reptiles were noticed to be in distress or dead. However subsequent inspection did indeed reveal deceased specimens at the location, in particular Trachemys scripta elegans and Tilapa spp. Based on the results tested and taking into consideration climatic conditions it can be assumed that the area is anoxic due to persistent drought conditions combined with the water quality. The mortality of birds in the area is more difficult to ascertain and it is recommended that a toxicological test be taken on specimens found to be dead in the area.