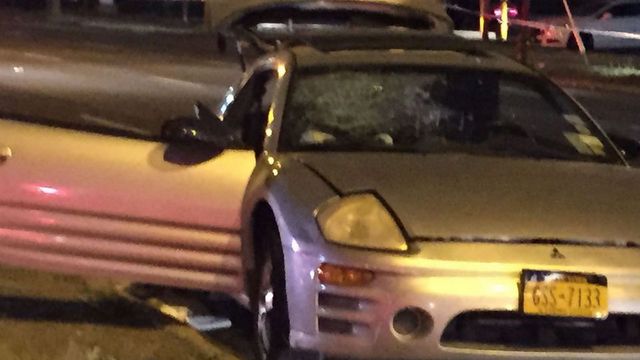 STATEN ISLAND, N.Y. — The man behind the wheel of a silver Mitsubishi that crashed into a pole on Richmond Avenue in New Springville late Sunday night, killing one female passenger and critically injuring another, has been charged with leaving the scene of a fatal accident, police said.

Hasim Smith, 22, of Eltingville, was driving northbound at a high rate of speed when he lost control of the vehicle while attempting to run a red light at the intersection of Richmond Avenue and Richmond Hill Road around 10:45 p.m., police said.

Both women, ages 18 and 19, were taken to Staten Island University Hospital, Ocean Breeze, in critical condition. The 19-year-old, identified by police as Alize Jorge, of Silver Lake, was pronounced dead shortly after 11:30 p.m., according to police.

The 18-year-old passenger, who was not identified, remains in critical condition at the hospital.

“I’ve seen a lot of crashes and I’ve never seen anything like this,” Elnahrawy said. “When you see the body flying out the car, then it hits you. Nobody cares about no traffic laws — everyone pulls up and everyone’s trying to help.”

Friends delivered social media tributes to Jorge and pleas for the 18-year-old passenger to pull through under the hashtags #RIPAlize and #PrayersForPorsha.