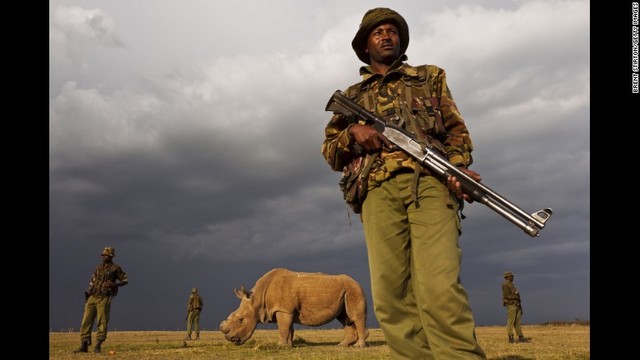 (CNN)And then there were four.

The 31-year-old rhino’s cyst was so huge, it was untreatable, a rhino curator at the Dvur Kralove zoo said in a statement. 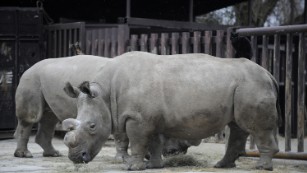 “It is a terrible loss. Nabire was the kindest rhino ever bred in our zoo. It is not just that we were very fond of her. Her death is a symbol of the catastrophic decline of rhinos due to senseless human greed,” the zoo’s director Premysl Rabas said in a statement.

The northern white rhino has been hunted to the brink of extinction for its horn, fueled by the belief in Asia that it cures various illnesses. The highly prized horn is made of keratin — the same material that makes up human hair and fingernails.

The only living male, 42-year-old Sudan, lives in Ol Pejeta Conservancy in Kenya, under 24-hour armed guard. His horn has been cut off to deter poachers. 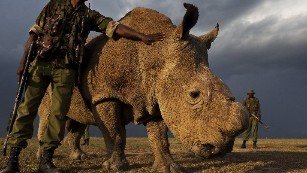 The fate of the subspecies rests on his armored shoulders, and on the two female northern white rhinos at the conservancy, Fatu and Najin, who also once lived at the Czech Republic Zoo.

“Sudan is currently old and may not be able to naturally mount and mate with a female,” said George Paul, a deputy veterinarian at the conservancy.

In addition, he has a low sperm count, experts say.

Najin could conceive, but her hind legs are so weak, she may be unable to support a mounted male.

“There has been recorded mating between different pairs over the last few years, but not conceptions,” said Paul.

The fourth remaining member of this dwindling subspecies, Nola, lives at the San Diego Zoo.

The dead rhino’s potentially healthy ovary and other tissue has been taken to an Italian laboratory, where her eggs may be harvested for future in vitro fertilization, the zoo said.

“It is our moral obligation to try to save them. We are the only ones, perhaps with San Diego Zoo, who have enough of collected biological material to do so. We are aware that our chances are slim, but the hopes are still alive,” said Rabas.

11 wildlife experiences that could vanish in your lifetime