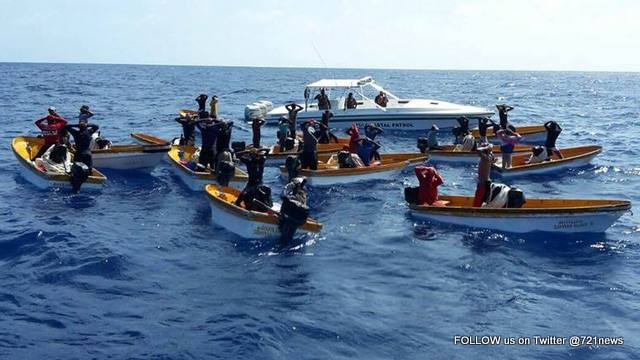 28 Poachers together with 14 unlicensed vessels were apprehended yesterday, 23 July, after Enforcement Officers from the Department of Environment and Maritime Affairs (DEMA) reacted to a tip-off from the TCI’s Marine Police Air Patrol.

The men, Dominic Republic Nationals, were apprehended at Whale Breakers, approximately 7 miles South of Bush Cay on Thursday afternoon. They were found to be in possession of illegal spearguns, breathing apparatus, as well as just over 2000 lbs of illegal catch, including Parrot Fish, Lobster and Conch.

“It is vitally important to rid the TCI of foreign poaching vessels, and we are very grateful for the Marine Police’s assistance with this successful operation, and I would like to thank all the DEMA Officers involved. In this particular case, the poachers were well-organised and well-equipped, and the scale of their illegal fishing activities was quite staggering.” Said DEMA Director, Dr John Claydon.

Officers confirmed that a total of 1462 lb of lobster, including 69 egg-bearing lobster, and 485 lb of parrot fish were seized. The Turks & Caicos Lobster season is only due to resume on the 15th of August 2015 and it is considered a serious offence to fish for or be in possession of lobster during the closed season. Similarly, the Fisheries Protection Ordinance prohibits the catching of parrot fish at all times. The individuals will remain in custody until they are processed by the Court on Tuesday.