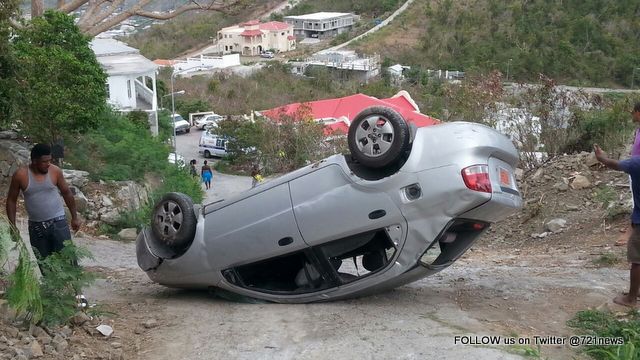 PHILIPSBURG, Sint Maarten —First Responders rushed to the Betty’s Estate district on Sunday afternoon as a driver of a Jeep turned over onto the road. No major injuries were reported however, the vehicle was damaged by the fall.

Police Spokesman Ricardo Henson informed 721 news that a woman was reversing into her yard, lost control of the car, and fell onto the next road. “The woman was not injured because she had her seat belt,” said Henson on Sunday. Ambulance and Police rushed to the scene to assist the lady who thankfully had her seat belt, the police spokesman stated.

The incident took place minutes to four pm on Sunday afternoon, on your way to the Mac school in Betty’s Estate.

In the same breath about 25 minutes after the SUV accident in Betty’s Estate, police were again called to rush to Weymouth Hill were a man driving a car turned over his vehicle however the damages was not severe as the SUV.

The driver was slightly injured and is believed to be OK after ambulance officials checked him for injuries. Police is calling on the public to be careful while driving and pay attention to the rules of the road.