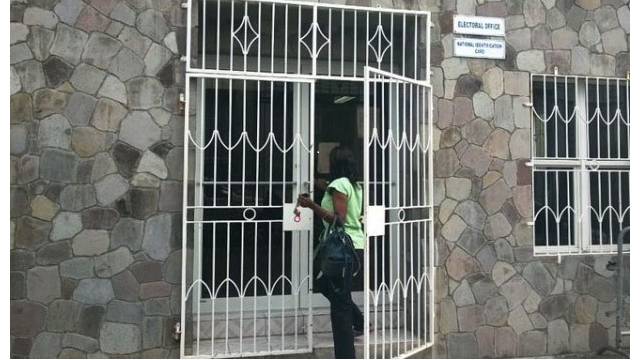 St. Kitts and Nevis (WINN):  Under new management, the Electoral Office in St. Kitts has re-opened for business following a months-long investigation.  The contract of the former Officer Manager Mr. Oliver Knight has been determined (brought to end).  Mr. Knight had been on vacation leave since the office was closed days after the February 16th election.

Attorney General Vincent Byron Jr. tells WINN FM that some other office staff members are also on leave, while others are back on the job under the management of Ms Amicia Mussenden who is acting in the Post.

“Miss Mussenden, is a senior public officer, she is the Chief Policy Analyst, the Chief Economist for the government, has been Acting, she is there temporarily, ‘cause she has been assisting with some of the investigations…and she has been very, very good at what she has been doing,” the Attorney General said.

“Mr. Knight was on leave and his contract has now been determined, so he’s no longer with the system.  Some of the other officers who had been there, are also on leave…or on sick leave as well as administrative leave and have asked for holiday leave, but we do have members of the office, who have been there, are still there, they are experienced,” he told WINN FM.

The AG said, other staff would be recruited in the interim as substitutes and possibly would be hired permanently.

“They will be going through a period of orientation and re-training…We have had now the addition to the staff of a Systems Administrator, and he’s based at the office helping to do the training and upgrading the system.”

The electoral offices on St. Kitts and Nevis were closed upon the new Unity administration taking office, following a controversial General Election.   An investigation was subsequently launched into the operations of the Office and the events surrounding the General Elections.

The office on St. Kitts reopened on Monday and has resumed conducting registrations and transfers.

“We have recently been given the green light by the police that they would no longer need the office, and so on Monday the staff reentered the office and it’s now open to the public.  They can register and they can transfer, that can be done in St. Kitts at this point in time…not in Nevis at this stage.  That will be done shortly.”

The office on Nevis re-opened in Nevis in April also with a new manager at the helm, retired civil servant and former educator Ernestine Rawlins.

The Attorney General said that the government will make the results of the investigations public when final reports from investigators and forensic auditors are received.