At approximately 12:10AM, Wednesday 24 June 2015, police and officers from the Fire department were called to assist police on scene following reports of a vehicle on fire at the Five Cays police station.

Officers on duty at the station at the time smelt smoke and went to investigate. On checking the compound of the station, officers discovered smoke and flames coming from a grey Ford Taurus that was parked in front of the building.

Fire fighters managed to contain and extinguish the fire, however the private vehicle was extensively damaged.

No one was injured during the fire.

A crime scene was established at the police station and have been examined by fire investigation officers yesterday (Wednesday 24 June 2015).

Police have arrested an 18 year old male suspect and investigations are ongoing.

No names or numbers are requested and only the information provided is passed on to the Royal Turks & Caicos Islands Police Force.

Update on Kevino Smith investigation and appeal for information 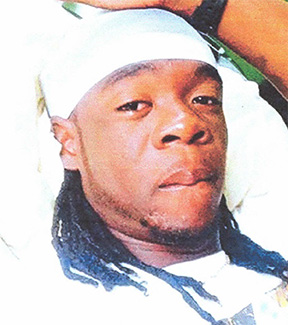 TURKS & CAICOS — Officers from the Royal Turks and Caicos Islands Police Force (RT&CIPF) are continuing their investigations into the disappearance of Mr. Kevino Smith of Grand Turk.

Up to the time of this release, police continue to await the results of the DNA. DNA analysis can be a long and difficult task however, it is an essential part of our investigation.

The forensic focus of the investigation has two main objectives. The first is to identify the remains and the second is to establish the cause and manner of death.

While the police awaits those results, as we have reassured the Smith family, we also want to reassure the the residents of Grand Turk and the wider Turks & Caicos Islands that our investigations are still continuing.

As part of our investigations, we are still appealing to anyone who may have information pertaining to Mr. Kevino Smith’s disappearance. No matter how insignificant you may think your information is, please come forward and let us know. 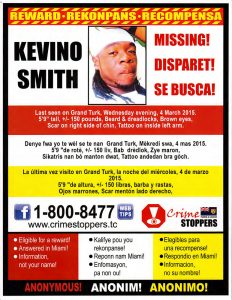 Officers of the Royal Turks & Caicos Islands Police Force are investigating the disappearance of 33 year old Colin who is a resident of a Five Cays address in Providenciales.

Colin was last seen on Friday (June 19th, 2015) at approximately 8:30AM at his home in Five Cays. At the time he was last seen, he was wearing a white polo shirt, a long pair of jeans and brown shoes.

He is described as a Negro male of dark complexion with a black low haircut, bearded with side burns. He has dark brown eyes and stands at about 5 feet 7 inches tall and of a slim build.

Police do not have a recent photograph of Banel Colin but here is a photo from one of his IDs:

Anyone with information surrounding his disappearance, location or any information relevant to this missing person report is asked to call the Royal Turks & Caicos Islands Police at 911 or 941-4448 extension 81843 or 81837, or use the untraceable, anonymous Crime Stoppers Miami number at 1-800-(TIPS) or 1-800-8477. No names or numbers are requested and only the information provided is passed on to the Royal Turks & Caicos Islands Police.

TURKS & CAICOS — Monday, 22 June 2015, — The Royal Turks and Caicos Islands Police Force (RTCIPF) have launched an investigation after a man was found on a roadway and later died, in Blue Hills yesterday morning.

At approximately 12:06AM (Sunday, 21 June 2015), officers attached to The Beat & Patrol Unit were called to Bible Street, after reports of multiple shots were heard being fired.

Police arrived to find a man, aged 22, with serious injuries lying on the road.

The man was taken to Cheshire Hall Medical Centre, where he later died. The name of the deceased is known to police but is not being released at this time.

There was also a second man, aged 20 who sustained a gunshot wound during the same incident on Bible Street. He was taken to hospital and treated for non-life threatening injuries. He remains in a stable condition.

An investigation was commenced and a crime scene established that was examined by detectives and forensic specialists.

Police are in search of two males who they believe can assist them with their investigations. Both males were last seen wearing short pants and black hoodies.

Police have not arrested any suspects at present.

Police are urging anyone with information about this incident to call Crime Stoppers on 1-800-8477 or use the Crime Stoppers online reporting page: www.crimestoppers.tc. Information you provide will be treated in the strictest of confidence. All calls are answered by Miami Dade Police and no one from the RTCIPF will know who called. Only the information received will be provided to the RTCIPF. We remind people they should not report crime information via our Facebook and Twitter pages.

TURKS & CAICOS — The Royal Turks and Caicos Islands Police Force (RTCIPF) are investigating a series of incidents that occurred over the weekend:

1)    On Saturday 20th June 2015 at approximately 11:18PM, a report was recieved of an altercation that took place at a business establishment on the Leeward Highway where three males of Five Cays received non-life threatening injuries from a blunt object. The ages of the males are 17, 18 and 21  year old.

It is also alleged that while fleeing from his attackers, the 21 year old male attempted to run across the road and was struck by an oncoming vehicle. He was rushed to hospital and treated for his injuries. The other two males were also taken to hospital in private vehicles. All three males remain in stable condition.

The driver involved in the accident involving the 21 year old male was on scene of the accident and spoke to police. Investigations are ongoing.

2)    On Saturday 20th June 2015 at approximately 11:35PM, a 20 year old male while in the vicinity of Suzie Turn, received a gunshot wound to his arm. The incident unfolded when someone fired multiple shots in his directions while he was in his vehicle. The vehicle also sustains damages. The 20 year old was taken to hospital where he was treated for non-life threathening injuries and remains in a stable condition.