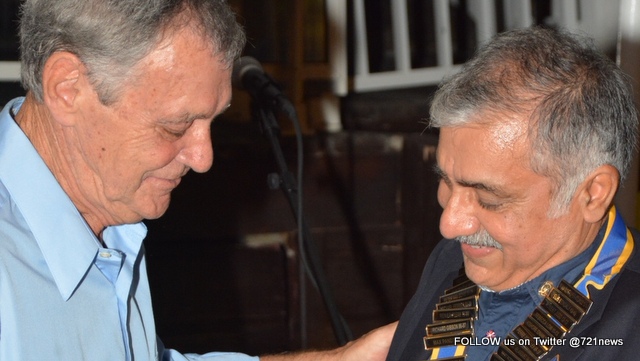 PHILIPSBURG, SINT MAARTEN – JUNE 24, 2015 – The Rotary Club of Sint Maarten named Mr. Pierre DeCelles as its Rotarian of the Year during the Change of Board Celebration on Saturday, June 20th at Captain Oliver’s Restaurant.

Pierre DeCelles came to Sint Maarten in 1980 and joined Rotary in 1995.  He has served the Rotary Club of Sint Maarten twice as President and Secretary, multiple times as Vice President and in Director level roles in the areas of the Rotary Foundation and Vocational Service.  Mr. DeCelles works as a Project Manager and is also the Canadian Consul on Dutch Sint Maarten. Pierre and his wife, Micheline, have been married for almost 50 years.

Incoming President, Jeffrey “Dr. Soc” Sochrin added, “Pierre has not only been an advisor to me over the past several years, he is a role model, a mentor and most importantly someone I am proud to call a friend”.

Mr. DeCelles accepted the award of Rotarian of the Year and thanked President Danny Ramchandani and the members of the Club for the honor.