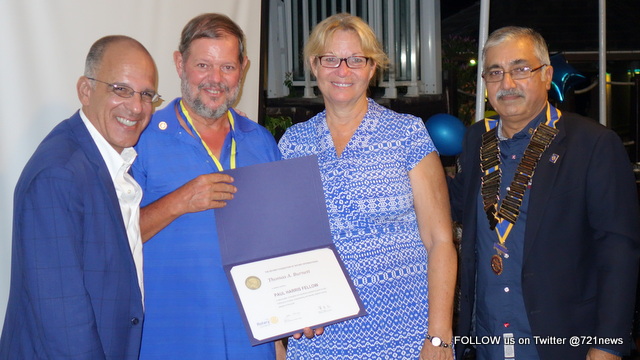 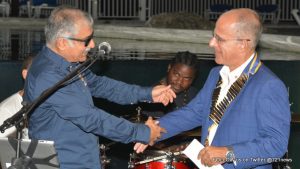 PHILIPSBURG, SINT MAARTEN – JUNE 22, 2015 – The Rotary Club of Sint Maarten kicked off its new Rotary year on Saturday, June 20that Captain Oliver’s Restaurant with a Rock & Blues Celebration featuring master guitarist Gianfranco and Christine Gordon along with rock band Church on Monday. Outgoing President Deepak “Danny” Ramchandani thanked the outgoing Board of Directors for their service and distributed more than $60,000 to worthy organizations on Sint Maarten, including the Catholic School Board After School Program, the Art Saves Lives Foundation, the Senior Citizens Computer Literacy Program, Scouting Antiano, the Pre-University of St. Maarten initiative, The ACE School, the Digikids Foundation, NewSTART for Children, the White & Yellow Cross, the Philipsburg Cultural Center and the Sint Maarten Little League. 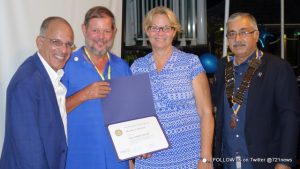 The Rotary Club of Sint Maarten also named Tom Burnett as a Paul Harris Fellow in recognition of his service to our youth on St. Maarten.  Tom and his wife, Lisa Davis, run an after school program which uses the sport of Baseball as a way to help young adults focus on their academic studies through the Sint Maarten Little League.  More than 50 young athletes from ages 8 to 18 participate in this after school program.  The program was also the recipient of $6,000 from the Rotary Club of Sint Maarten to expand its facilities and accommodate more young athletes, as well as a donation of equipment including bats, two dozen baseballs and gloves.

President Ramchandani then officially turned over the reigns of the Club to Jeffrey “Dr. Soc” Sochrin.  Sochrin went on to present three additional Paul Harris Fellows.  Posthumously, a Paul Harris Fellow was presented to Charles E. Southworth, Jr, a Past President of the Rotary Club of Nauset (Orleans), Massachusetts, USA,  that was accepted by his son, Charles E. Southworth, III, a Sint Maarten resident and Island 92 radio personality, known on air as “Mr. S”.

Sochrin then called upon the two men who taught him about serving others; his uncle, Gary Sochrin of the Rotary Club of Derby-Shelton Connecticut, and his father, Sumner Sochrin.  He went on to present both men with Paul Harris Fellow Awards.  To Gary Sochrin in recognition for his years of work with Rotary and to Sumner Sochrin, in recognition for more than 50 years of coaching young men in the sport of baseball at the high school and collegiate levels. 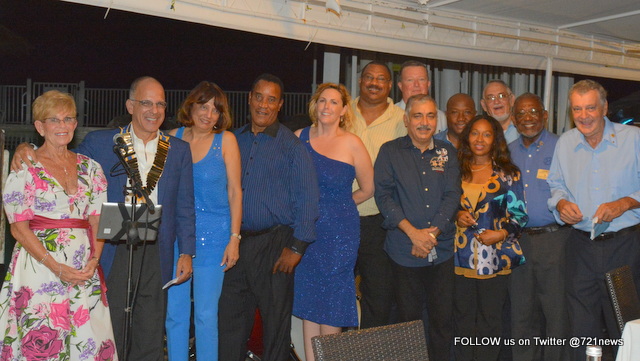 Sochrin went on to say, “We have been asked by our District Governor and the Rotary International President to move from being successful to being significant and to be a gift to the world.  We will do that together by continuing our focus on youth and continuing the great efforts that have become part of our local traditions.  With this in mind and before we get started with the FUN part of the evening, I’d like to leave you with a few words that were shared with me from my very first boss in back in 1989.  These words are attributed to Ralph Waldo Emerson and they most fitting here.  Let us together raise our glasses together”.  Sochrin continued, “To laugh often and much; to win the respect of intelligent people and the affection of children; to earn the appreciation of honest critics and endure the betrayal of false friends; to appreciate beauty, to find the best in others; the leave the world a bit better, whether by a healthy child, a garden patch or a redeemed social condition; to know that one life has breathed easier because you have lived.  This is to have succeeded”.