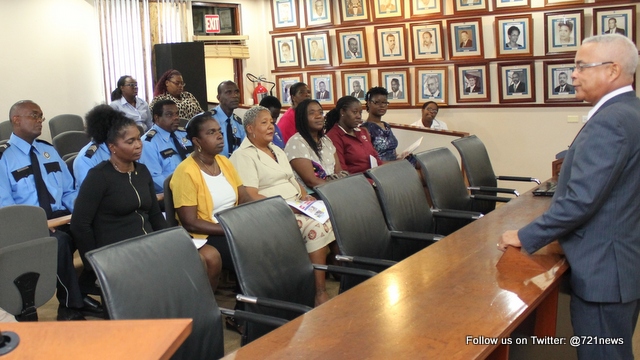 PHILIPSBURG, Sint Maarten – Honorable Prime Minister Marcel Gumbs on Wednesday administered the oath to a number of civil servants in the A.C. Wathey Legislative Hall at the Government Administration Building.

Prime Minister Gumbs spoke to the civil servants about integrity and being productive while carrying out their duties to the nation.

The oath taking is part of the integrity compliance within the Personnel & Organization Department. The law acknowledges that and as a result requires that all public servants upon employment, upon changing of function or when acting in another function must take an oath.

The oath taking is part of the standards of conduct within the civil service organization of the Government of Sint Maarten.  They are standards for ethical conduct that promote common values and define the behavior and performance expected of a civil servant.