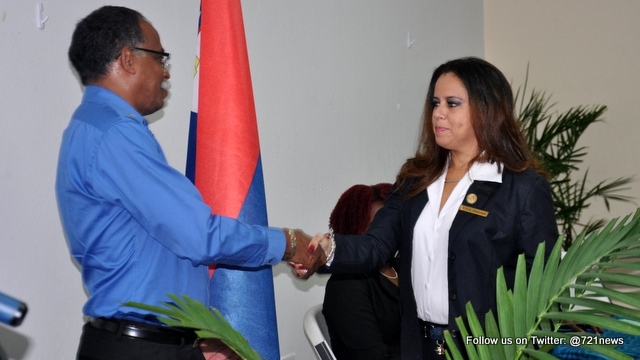 PHILIPSBURG, Sint Maarten — Police union NAPB section St. Maarten had a swearing in ceremony at the John Larmonie Center on Wednesday afternoon. The new President ‎Jeanine Peterson and its 13 member board was inducted as the new board and took oath in front of President of the Curacao based NAPB union, Rolando Abrahams.

Acting Police Chief Carl John and Minister of Justice Dennis Richardson were just some of the guest that filled the center on Wednesday. The president plans to dispatch the board and meet with all employees in the justice ministry to find out if they have any grievances. “as the first female president of the union , I will bring a woman’s touch to the office and work in the best interest of all members”. Peterson said.

Minister of Justice Dennis Richardson in his speech to the new board said, “Continue to work for the best interest for your members, we have been working for the past two years on backlog promotions and salary adjustments for St. Maarten officers and we are getting there”. Richardson is presently working on the function book, which regulate the positions of persons working in the justice ministry. The law will be given to the council of advice for further handling. “My doors are always open and I look forward to your continued cooperation” said the minister of justice.

Acting Police Chief Carl John congratulated the new board and said “this is an example, the fact that I am standing here, management of the police and the union continues to have a good and reasonable relationship. The impression is always given that the union and the management should be fighting however this is not the case with the police union. We consider the union a strong and valuable partner in building a strong police for St. Maarten”, John continued by stating that the union should never allow anyone to take over the police of St. Maarten.

The board consists of 14 persons and long-time member Chief inspector Carlyle Rogers, Head of the Simpson Bay district said the board is balanced, seven ladies and seven men. President of the NAPB Curacao Rolando Abrahams said that having the job of president of the union will take a lot of time from her free time however he knows that Peterson is up to the task of doing a good a job as the first female president.

Peterson called the board and congress to rally behind her and commit to making the justice ministry a better place to work in. “we have a lot of work to do but I know that we all can do it, I would like to thank my idol and mentor Chief Carlyle Rogers for all the advice he has given to me over the years and know that I would not be standing here if it wasn’t for him” an emotional Peterson said while speaking during her acceptance speech.