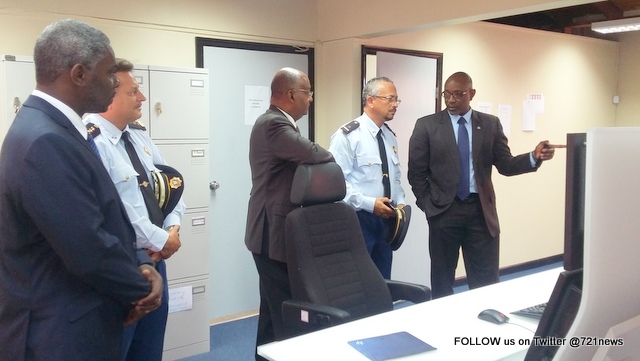 PHILIPSBURG, Sint Maarten — The police department announced yesterday during a ceremony at the police station that there is now a 24/7Central Dispatch Center in operation. The combined central post hosts calls and manages communication lines between the police and ambulance emergency services. In the past, the Central Dispatch Center had only communication with police officers. The authorities saw the need for including the ambulance and fire department. However, the fire department opted not to participate.

In 2009, the Executive Council gave the mandate to the police department to centralize all communications between the emergency services on the Dutch side of the island. Groundwork for the project started and it wasn’t until 2012 when funding agency Usona approved the financing. The staff went through vigorous training sessions and completed several courses before being able to operate the phones and deal with real persons in need of assistance. In April, the Central Dispatch Center started to operate. The center is equipped with the latest technology and can operate under extreme circumstances.

New corporate foundation, Public Private Partnership  Foundation (P3) has been established by several entrepreneurs to assist the police with several funding challenges they may face. Chairman Eric Illis spoke to the gathering yesterday and outlined the foundation’s mission statement. The foundation has already committed to providing hurricane shutters for the Central Dispatch Center and train the staff off-island if need be by assisting with their airfare and transportation costs. Illis is calling out the business community to join the new foundation to give the police department the much needed backing.

Nagico Insurances conducted several training workshops for the staff and gave live-scenarios where staffers had to deal with different situations. Head of the traffic department Benjamin Gout congratulated the entire staff and gave a presentation about the initial stages of the project, he says the project will continue to grow and hopes that the fire department will join on to the Central Dispatch Center soon. Citizens in need of ambulance or police assistance can call 911 and be connected to the central post.

Minister of Justice Dennis Richardson congratulated the police force for taking the next step in establishing this center. “Next will be a camera system and a drone project, this will be streamlined with the communications center who will act as the nerve of the projects”. The minister said cooperation between government agencies continues and commended the police and ambulance department for working towards one central communications system. “We do hope that our fire department joins the system too, this would mean that it would be complete and all emergency services will be under one roof,” Minister Richardson said.

Commissioner Carl John gave an uplifting message to the personal of the department and commended them for their dedication towards improving the department. “We are not stopping, former Minister of Justice Roland Duncan said it, the small train will continue to strive for better. We are always over looked and everything that is bad within the civil service is mentioned but just five years in acquiring new country status, we have achieved allot. The police force of Curacao is presently asking about our Central Dispatch Center, this means we are doing something good”. The Commissioner feels bad that the fire department is not part of the system however there is good cooperation between the police and the fire department. John mentioned the Hurex hurricane preparedness exercises where all emergency services worked, hand in hand.

Minister of Health Rita Bourne-Gumbs was not able to attend; Minister of Economic Affairs Claret Connor represented the minister in her absence. After the ceremony, the officials gave dignitaries a tour of the Central Dispatch Center located upstairs from the Philipsburg Pharmacy on the Vogessteeg.