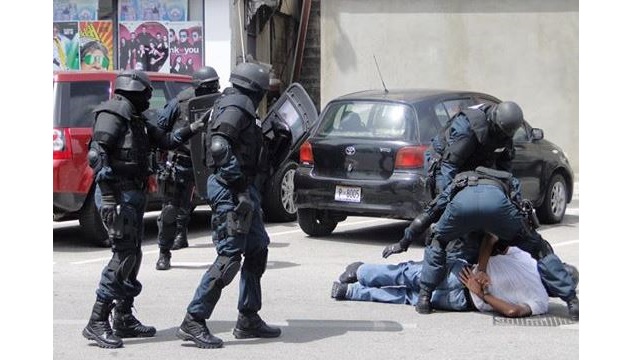 PHIIPSBURG, Sint Maarten — For the past 12 weeks, with the blessings of the Honorable Minister of Justice Dennis Richardson and in collaboration with the other police forces in the Dutch Caribbean, a group of 25 police officers from the police forces of Bonaire, Curacao, Aruba and Sint Maarten took part in an intense training provided by the D.S.I. (Dienst Speciale Interventies) from the Netherlands.

The training was very intense for the participants and required much of their physical, intellectual and psychological capacities. The training took place on the island of Aruba and was coordinated by the Police Academy on that island together with D.S.I.

With the good cooperation from the Military Base on the island which allowed the physical training and use of the facilities, the receive instructions on combating terrorism, to be a success.

The training that these police officers received was a specialized training qualifying them to become a member of the “Arrest Team” on their respective islands and also be able to function on the other islands within the Kingdom when they are requested, once they have successfully finished the training.

On Friday June 12th during a ceremony held at the Military Base in Savaneta and in the presence of the Honorable Minister of Justice of Aruba Arthur Dowers and other dignitaries, the officers who successfully finished this intense training received their diploma and their “Blue Barrette” which symbolizes an officer qualified to be a member the “Arrest Team”.

Officers from Sint Maarten who also finished this training successfully have returned to Sint Maarten. The Acting Chief of Police Commissioner Carl John also attended this ceremony and is quite contented with the results.