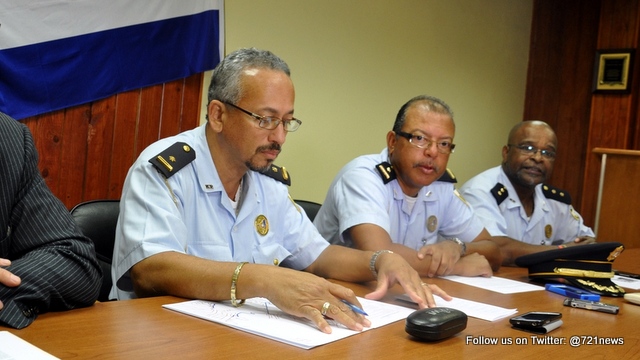 On Tuesday June 30th at approximately 08.25 a.m. a 40 year old female suspect was arrested at her home in Sint Peters on several charges of verbal and written public defamation, stalking and insult. During a search at her home numerous items ranging from computers, video cameras, external hard drives etc.

were confiscated. The suspect was brought to the Philipsburg Police Head Quarters where she is held for questioning. The investigation is being done by the Detective Department.

Based on ongoing investigations of several cases and information gathered by the Detective Special Robbery unit, on Tuesday June 30th at approximately 04.50 a.m., a raid was done at least two homes in Cole Bay.

The raid was done with the assistance of the Police Arrest Team because of danger that was involved. At the home of a 32 year old male suspect two shots were fired at the Arrest Team, however the team managed to arrest the suspect without firing back.

A female suspect was also arrested at that home. As the investigation continued at another home close by, two other male suspects were arrested. All suspects in question were arrested for crimes ranging from drug trafficking, armed robbery, illegal firearm possession and attempted murder.