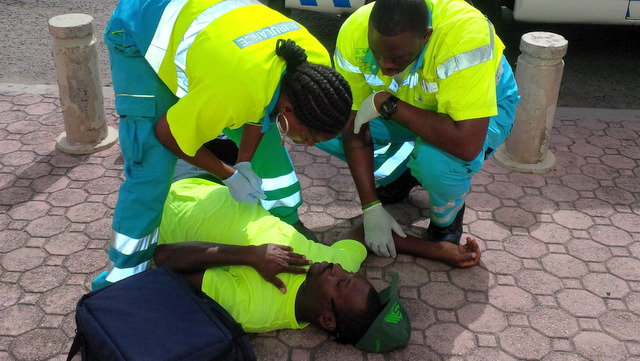 Philipsburg, Sint Maarten — Immigration and customs officers conducted several patrols at the same time on Wednesday morning. During controls on the Walter J Nisbeth road, there was one situation that stood out. A worker from Clean St. Maarten while walking was stopped by the officers and asked for his documentation. The man responded by explaining the officer that his papers are in and being processed. The officer informed the Haitian national to follow him, to his vehicle to answer more questions. 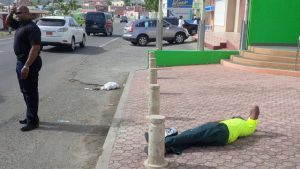 The man threw himself to the ground and closed his eyes. The immigration contacted the ambulance department who arrived on the scene 15 minutes later. When checking for responses, the first res-ponders called out to the man, he responded by opening his eyes.

Ambulance department officials told the man to get up and he got up and started to smile. The officials continued to talk to the individual and told him that faking is not good and he is wasting resources. They sympathized with the man however still gave him a full body check-up.

Immigration officers did not detain him. After his check-up, he left the scene to continue his day.

721 news understands that 16 persons, thus far are in custody, after the controls of Wednesday morning. The Immigration and Border patrol is requesting all persons to walk with proper identification.