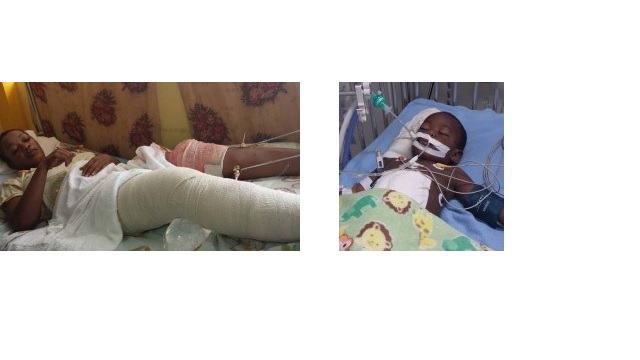 GEORGETOWN –– Nurses and doctors at the Georgetown Public Hospital Corporation (GPHC) are amazed that 16-month-old Travis Rudder Jr seems to be recovering despite being hit five times in the abdomen.

Little Travis received six gunshot wounds, five to his abdomen and one to his leg. Kaieteur Newsunderstands that nurses and doctors have been working around the clock to save the child’s life.

There is hope since the child has come this far, considering the seriousness of his injuries, a medical source said.

Political activist Mark Benschop paid the child and his mother a visit yesterday. He commented on the usual criticism that the hospital receives by persons who opined that all nurses and doctors are defective in executing their job. He applauded the health practitioners in the ICU for their interest in the child.

Kaieteur News understands that nurses in their numbers flock to the child’s bedside, then join hands in prayer for his recovery. There is one bullet remaining lodged in the child’s abdomen, close to his intestines. This has made its removal technically difficult and doctors are waiting for the bullet to move so that they can extract it.

The child’s mother Mawanza Gill, who was also injured in the shooting, is recovering from the wounds she received. She was shot seven times in her legs and is now strapped to her hospital bed.

She is alert and concerned about the child’s condition. She is having flashbacks about the incident as she continues to hear the gunshots in her head.

Yesterday, according to Benschop, the woman was in tears but was lifted when she heard that the baby was doing well. Relatives and friends have been showing up in their numbers to give their support to the mother.

Gunmen firing semi-automatic pistols through a bedroom window pumped bullets into Travis Rudder, his wife and baby son, as they slept in their bedroom.

By the time the gunmen’s clips were empty, 26-year-old Rudder lay sprawled and lifeless on his bed; his son Travis Jr badly wounded, and his reputed wife Mawanza Gill, bleeding from gunshot wounds to both legs.