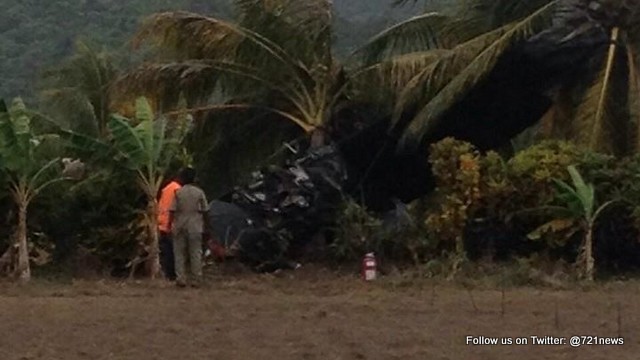 It has been confirmed that one of the two men who were on board a small plane that crashed in the Georgetown area of St. Vincent & the Grenadines (SVG) on Monday is a St. Lucian national.

SVG police have identified the men on board the Cessna 337 as pilot Wayne McDiarmed of St. Lucia and co-pilot Marvin Fabian Peka of Grenada.

Both men are reportedly in stable condition at Milton Cato Memorial Hospital after they were transferred from the Georgetown Hospital.

Security officer at the Langley Park airstrip, Leon Yearwood, who witnessed the crash, told St. Vincent media that the plane was at a good height but seemed to have lost power and was gliding by the winds. He said it then clipped some “Mollet” trees before crashing onto the farm land owned by Ernestine Medica of Langley Park, Georgetown.

Caribbean News Service (CNS) reported that the plane was travelling from St. Lucia to Carriacou when it crashed in Georgetown which is on the windward side of St. Vincent.

The scene at Rabacca where a crowd has gathered to try to get a glimpse of the crash. Police investigators have cordoned off the area preventing curious onlookers and the media from getting a closer look.

Posted by Searchlight newspaper on Monday, May 11, 2015 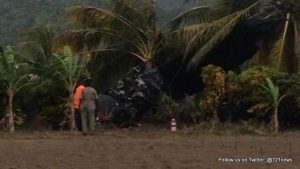 KINGSTOWN, St. Vincent, May 11 2015 – A small plane, with two people aboard, crashed in St. Vincent Monday. Both occupants, said to be St. Lucians, have been rushed to hospital but are said to be in stable condition.

Caribbean News Service (CNS) understands the plane was travelling from St. Lucia to Carriacou when in crashed in Georgetown which is on the windward side of St. Vincent.