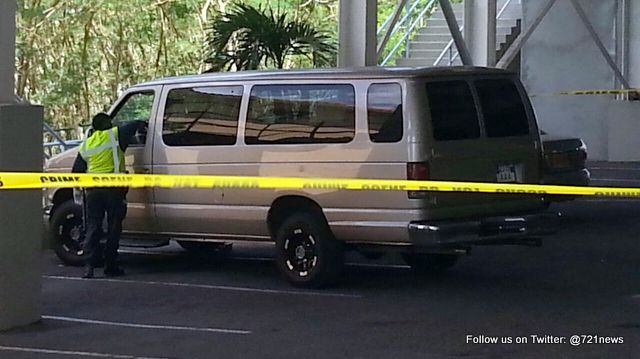 A search was launched early Monday morning by the wife of Romney Virginia Carty and another family member as he did not return homeSunday night into Monday morning.

A BBM notice was also placed aimed at locating the missing Taxi Driver.

Early Monday afternoon reports came in that his Taxi Van was located under the Mega Plex Movie Theater and that someone was inside of the vehicle but not showing any signs of life.

When family members arrived on the scene, the surrounding area encompassing the Chach Man’s Taxi van had already been cordoned off by the police who had initiated an investigation.

Although the cause of death has been determined to be of natural causes, there are still many unanswered questions that the family and authorities are now seeking answers to.

Calls to his telephone early Monday morning rang out. Some family members who tried to call Romney reported that they did not get a ring but in fact a message indicating that the phone was off. It should be noted also that their efforts later to contact him resulted in a clear ringing of the telephone.

The police is said to be still investigating the case to ensure that all loose ends are tied up.

The full police report can be read below;

Man found dead in his vehicle.

COLEBAY, Sint Maarten — On Monday May 4th at approximately 01.05 p.m. police patrols were sent to the parking lot of Mega Plex Theatre where a man who was showing no signs of life was found.

On the scene the investigating officers located the lifeless body of the male victim sitting in his taxi in said parking lot.

Dr. Douglas arrived on the scene and pronounced the death of the victim. The victim with initials J.A.R. (55) did not return home since Sunday May 3rd.

Investigations done by the Detective and Forensic Department did not show any signs of foul play.