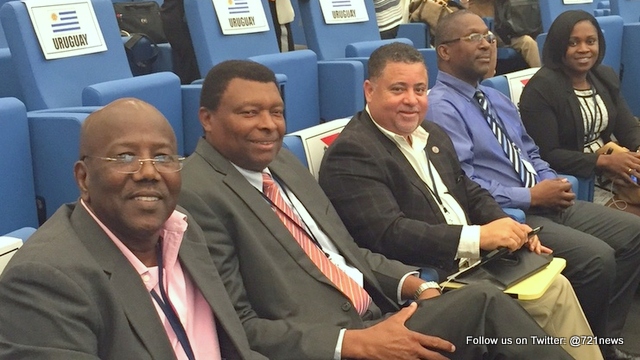 MPs Marlin-Romeo and Marlin took part in the meeting of the Committee of Political Affairs, Municipal and Integration. One of the agenda points was legislation in material powers of the municipality in the various member countries.  Argentina, Mexico, Ecuador, Costa Rica, Venezuela, Brazil, Uruguay, Curacao, Bolivia, and the Dominican Republic made presentations with respect to their structures and processes.

The second agenda point was related to Latin-American Integration Affairs.  Parlatino would like all members to introduce “Parlatino TV,” which would bring forth transparency to the people in Latin American and the Caribbean with respect to the deliberations that take place at Parlatino.

Some discussions took place about the status of the draft framework Law for a Comprehensive Approach of Problematic Consumption from the Committee of Citizen Safety.  This draft law would protect against school violence (eg. bullying).

The following draft framework laws were approved by the Ordinary General Assembly: Electric Energy; Renewable Energy; Law Regulating the Production of Non-biodegradable Plastic Bags; Law on Education for Sustainability; Law on Migration in Latin America and the Caribbean: Workers, Families and Vulnerable Groups; Law that Regulates, Controls, and Monitors the Use and Application of Substances of Fillings for Aesthetic Treatments in Latin America and the Caribbean; Law on the Protection of the Coastal Marine Environment, especially ecological systems of Coral Reefs, Mangroves and Sea Grass.

Other draft framework laws approved were: Professionalization Project of Citizen Security Forces in the framework of Democracy and Respect for Human Rights; Law on Eco-tourism in Protected Areas; Proposed Legislative Harmonization Study on the Right to Education of Children and Youth Hospitalized or in a situation of disease in Latin America and the Caribbean.

The draft Law on Health was also approved; Law on Transplants of Cells, Tissues and Organs for Latin America and the Caribbean; Law on Citizen Safety; Law Cyber Delinquency; Law on Prior Consultation and Information to the Indigenous Peoples and Indigenous Communities; Law for People of African Descent; Youth Employment Law; and the Law on Prevention, Care and Protection against School Violence.

There was a panel discussion under the banner: The Role of the Media and New Information Technologies in Democracy.  Parlatino has established a project, “Latin American Parliamentary Network Communication,” and the first stage is called “Parlatino Web TV.”

There were two panellists, a journalist and the other one was a European Union (EU) spokesperson.  The latter discussed the set-up of the EU Parliament and the challenges it also faces where it comes to transparency especially having 23 languages within the EU, and how these are dealt with.

A cooperation agreement was also signed during the five-days of Parlatino deliberations.  This was between the Andean Parliament and Parlatino.

Election of members of the Board of Parlatino also took place during the Ordinary General Assembly.

The Parlatino working visit took place between May 12 and 17.  There were a total of 139 representatives from 20 parliaments that attended the Parlatino sessions.