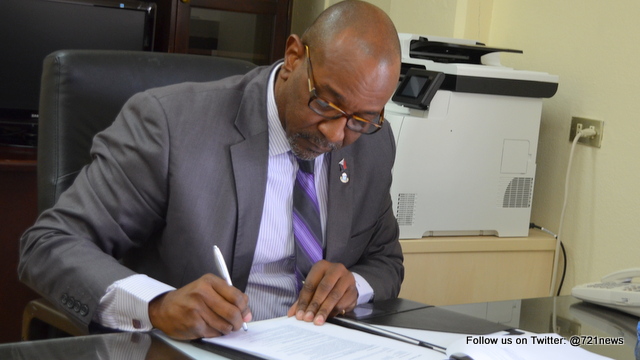 Philipsburg, Sint Maarten — -The contract between security company Checkmate and the Harbor Group of Companies was presented to Parliament members on Thursday afternoon. The meeting was called by the National Alliance Faction. The Minister of Tourism, Economic Affairs, Transport and Telecommunications Claret Connor was present with support staff to give account on the alleged contract.

Member of Parliament William Marlin on the impression of the contract being from the Harbor group, debated about the scribbling on the document showing a line crossing out the hourly wage from US$ 6, 50 to US$ 10, 30; He asked who crossed out the amount and placed it on the document, he went on to say that it is strange that no initials was placed next to the change of hourly wage. Several speakers later after a 35 minutes recess, Minister Connor resumed by apologizing for making adjustments himself to the document, scratching the amount was based on his notes, not the Harbor Group or Checkmate.

The agenda point read; the previous and current contract signed between the Harbor Group of Companies and Checkmate Security, and the sudden hike in the contract sum for outside security services. The turn of events in the meeting started after Minister Connor adjusted the old contract between checkmate and the harbor and presented this to parliament for perusal. The document presented was a 2005 contract signed between the previous owner of Checkmate and Harbor CEO Mark Mingo.

In February word circulated that a major increase in the harbor security budget took place, it was estimated US $2.2 million increase from US$ 963,715 spent in 2014 to US $3,138,300 for 2015. NA Member of Parliament (MP) Christophe Emmanuel was furious with Conner for presenting what he called “a fraudulent document” to Parliament. “This is more reason why an investigation is warranted into the operations of the harbor group”.  In reaction to the minister’s statement, MP William Marlin is of the same opinion and wants to know if there is indeed a contract between the Harbor and Checkmate.

Minister Connor continued to say that he will not discuss the contract in a public meeting and will provide the answers in writing to the members within two weeks. Coalition members turned the discussion into the National Alliance Members of Parliament is against locals and did not question the minister about the drastic increase in the contract. Chairman of Parliament Dr Lloyd Richardson closed the meeting and said that if the opposition wants to discuss the contract again, a new meeting should be called and considered the meeting and topic closed.