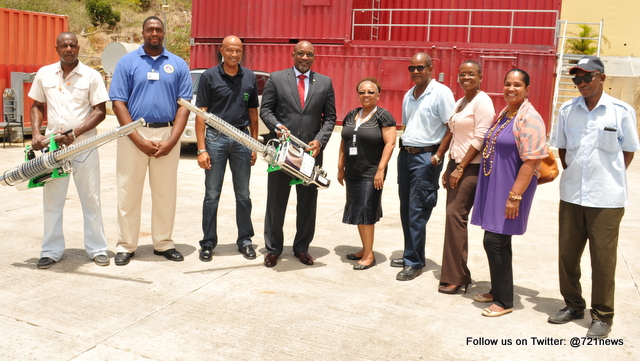 GREAT BAY, Sint Maarten (DCOMM) – In order to secure the continuous mitigation of the Aedes Aegypti mosquito population in the aim to minimize the number of dengue and chikungunya and possibly in the future, the zika virus, the Collective Prevention Services (CPS), a department in the Ministry of Public Health, Social Development and Labour (Ministry VSA), has added four hand-held foggers to eliminate adult mosquito’s.

The hand-held foggers are to ensure an effective response, but the population still has a major responsibility to eliminate mosquito breeding grounds in and around their homes and businesses to prevent the spread of mosquito-borne diseases.

A work visit in the past by the Caribbean Public Health Agency (CARPHA) and the Pan American Health Organization (PAHO) at the request of Sint Maarten’s Ministry of Public Health, resulted in a number of recommendations being made to improve the vector management and surveillance in order to make financial investments in obtaining additional resources.

The recommendations included setting up mosquito traps at the harbour and within the community; acquisition of hand-held fogging machines; and the hiring of additional staff for field work.

The hand-held foggers will be used when reports are received of large mosquito populations are a particular address. Residents should continue to take preventive measures especially now that the country has been experiencing some rain showers.

PAHO has notified public health agencies in the Caribbean and Latin America about recent outbreaks of Zika fever in different regions of the world.  This virus has the potential to spread across territories where the vectors (Aedes mosquito) are present.

CPS is advising travellers to take necessary preventive measures when abroad and to report upon their return to their family physician if they experience symptoms.

The community is requested to be on alert and take action in eliminating mosquito breeding sites in and around their surroundings after rain events.

PHOTO CUTLINE: Vector controllers during a recent training along with other public health officials with respect to the use and maintenance of the new hand-held foggers. Minister Hon. Claret Connor (4th from left) holding one of the hand-held foggers.  Minister Connor attended the training on behalf of his colleague Acting Minister of Public Health Hon. Rita Bourne-Gumbs.  DCOMM Photo