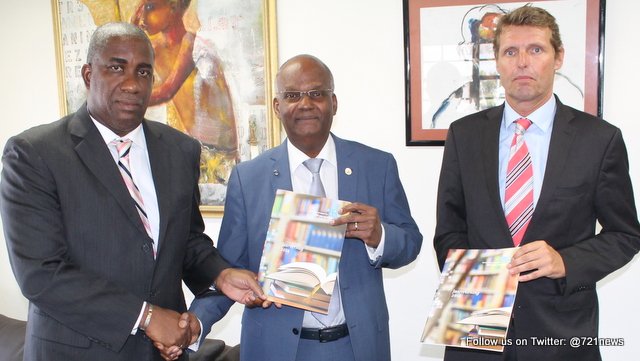 PHILIPSBURG – The Minister of Justice Hon. Dennis Richardson earlier this week received from Supervisory Board member Kelvin Bloyden and Vice President Coen Luijks of the Joint Court of Justice, the joint courts 2014 Annual Report.  The court received a clean bill of health from external auditors PriceWaterhouseCoopers.

The report outlines the operations of the joint court over the year 2014.  The overall theme in the report is ‘Quality.’

The report covers the Joint Court’s activities of the past year and its future plans as well as information about the number of cases filed and dealt with by the Joint Court.

The Joint Court covers the Courts of First Instance on the six Dutch Caribbean islands and strives for quality judgments in all its jurisdictions on time, within the budgetary frame, whilst considering the needs of the societies it serves.

Financial results
Financial resources are limited, whilst higher investments are needed. By implementing a personnel hiring-stop and through cost control, the Joint Court has been able to limit the operational expenditures. The result is that the 2014 budgetary year has closed with a limited, but positive financial result. The Joint Court was forced to take hire-stop measures, due to budget cuts and the delayed financial contributions by the governments of the countries it serves.

Improvement of quality
In the past year, the available resources were used to improve the quality of service, both through training and better facilities, such as the ICT-infrastructure. The skills and knowledge of the personnel were improved through legal training and courses in customer service. More efficient and transparent business processes have also been implemented.
With the introduction of the Personnel Council, employees have a platform for their voice to be heard and through which they are structurally included in the organization of the Joint Court.

Case load
There has been a shift in the cases brought to the courts. The number of light cases has reduced significantly. However, the work load of the Joint Court has not dwindled as the number of larger and difficult cases has increased. Significant differences in the courts of first instance have resulted in a demand on the flexibility of judges and staff.

Improved accommodation
The accommodation of the courts has been improved. In Aruba, the Court of First Instance moved into a newly renovated building. In St. Maarten the former old Parliament has been added as an extra location next to the Courthouse. In Curaçao, several renovation projects have taken place. There, separate and secured offices have been realized for the investigating judge in criminal cases.

The joint court is responsible for Aruba, Curacao, Sint Maarten, Bonaire, St. Eustatius and Saba, for the administration of justice in first instance and in appeal on the islands.

The members of the Joint Court of Justice deal, in first instance and in appeal, with civil cases, criminal cases, and cases of administrative law.