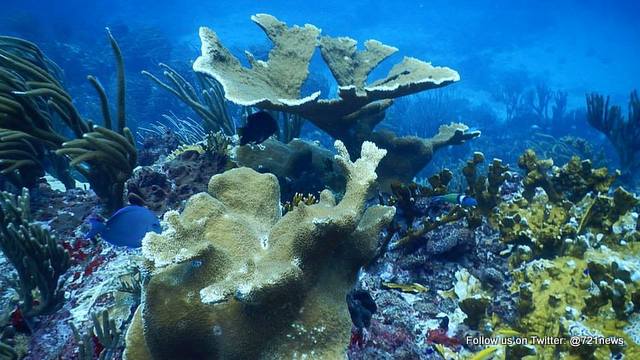 A few years ago I found myself in water as clear as gin with above me a swirling cyclone of horse-eyed jacks churning in the endless azure blue. Off in the distance large schools of fish swirl like living rainbows. As I check my air and kick over the edge of the submarine canyon into the Deep, a profusion of coral shining like submerged jewels rises on either side of me.

As I dive deeper and deeper, and as my air slowly converts itself into a gas as toxic as it is intoxicating, I see a black-tip reef shark, one of those lords of the sea, slowly and confidently swimming into the gloom, oblivious to everything except his own rightful place at the top of the ocean food-chain. At about one hundred and eighty feet I slowly start to make my way to the surface. Suddenly the bubbly sound of my exhale is replaced by a song so melancholy and hauntingly beautiful that it is as bewitching as it is unforgettable: a male humpback whale is singing. And as with the best of all songs his is for love, hoping to attract a mate over the vast ocean. With this as background music I make my decompression stops surrounded by prolific life: turtles and stingrays, blennies and conies and triggerfish. All in such profusion and surrounded by such healthy coral it is as if I am floating in a dream. Before I leave the water I see a grey flash in the distance that startles me. I look more closely and see a lone bottlenose dolphin chasing a grunt as much in pursuit for food as in pursuit for fun. Once back on the dive boat I look up at the majestic volcano known to all who love it as the Quill.

This is Statia, and more specifically, this is one of the two reserves of the Statia Marine Park. I just dove on a site known as the Grand Canyon, one that ranks amongst my favorite in seventeen years of diving. It is a place that I have learned to love as much as the waters I have grown up in and have made my passion to protect here on Sint Maarten. And it is a place in grave and immediate danger of not existing anymore.

Before the dive I describe above I spent years in University and on projects in Bermuda and off of the coast of Eastern Africa and I was ready to come home. I responded to an ad for a Marine Park Manager on St. Eustatius with an organization called STENAPA. And although it was not Sint Maarten I jumped at the opportunity to be a little closer to home.

But Statia, STENAPA and the Marine Park have taught me so much in the year that I have lived there. I have learned that the value of the St. Eustatius Marine Park runs into the tens of millions of dollars in revenue that it provides to the island. And I have learned that its reserves, areas that are closed off to fishing, contribute to the healthy and robust fishery and fish population that occurs on Statia.  That is why it was with much concern, and deep trepidation that I learned from my colleagues that there might be plans to drastically alter the seascape of the island by completely abolishing the reserves of the Marine Park.

Globally we are faced with a systematic destruction of our marine environment, a destruction that will ultimately result in our own undoing. Overfishing and pollution have taken their toll on oceans that were once teaming with life. And without our oceans, as esteemed Marine Biologist and Conservationist Sylvia Earl put it, the Earth will in fact be Mars; ‘devoid of life’.

The most effective way in ensuring that our oceans are protected and have the ability to restore themselves, where fish can regenerate without the pressures of fishing and stocks can spill over into all territorial waters, is the establishment and management of Marine Reserves. Areas closed to fishing but open to non-impactful eco-tourism such as diving and educational projects.

The elimination of the Reserves of the Statia Marine Park have the potential to open a Pandora’s box of dangers and issues which threaten the very existence of Statia as such a unique island in the North-eastern Caribbean, with some of the healthiest reefs and fish populations anywhere.  During the year that I worked in Statia as the Manager of the Marine Park I have seen animals and ecological communities there that rival even the most profuse areas I have seen while working in the Indian Ocean. The untapped potential of Statia as a dive tourism destination runs into the millions and millions of dollars.

The discussion that the reserves should be reversed is based on unfounded fact lacking any scientific basis, and it is unfortunate that the discussion has been tainted by the scourge of politics. Reserves actually increase fisheries instead of restrict them. They allow large healthy fish to reproduce and make more large healthy fish in an environment where they are protected and managed; thus reinforcing the fish stock on the island. For it is beyond the intellect of a fish to decide that it will stay in a reserve and it will inevitably swim into a fishable area.

I therefore urge the people of Statia, people whom over the course of the year I have worked and lived there I have grown to love as my own, to realize that the reserves in the Marine Park are necessary and crucial to the survival and uniqueness of the island. And to ensure that Statia’s unique and beautiful underwater life may remain so into infinity. And that our offspring will always be able to play in the Golden Rock’s beautiful coral gardens.