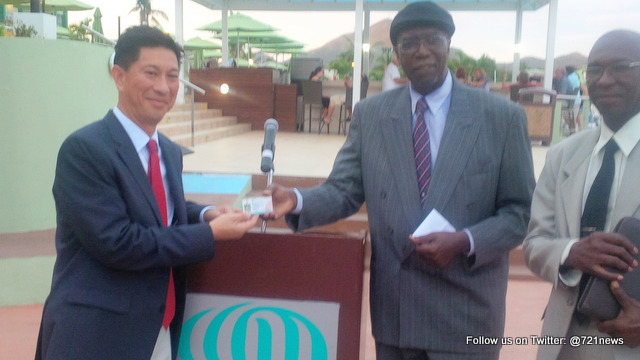 MAHO, Sint Maarten –– The St. Maarten Grassroot movement awarded politician and president of the Caribbean Hospitality and Tourism Association Emil Lee with its honorary ID card at the Sonesta Great bay resort yesterday. President of the movement Leopold James presented the card to Lee in front of family and friends.

Lee in accepting the card thanked James and the grass root movement for presenting him with the card. “Imagine if Leopold James and Emil Lee can find common ground and work together for the best interest of St Maarten, we all can. Change is inevitable.  We need to have an open mind and the courage to learn and adapt.  As long as your interests are truly for a better St Maarten, then we should all be able to find common ground and work together. I am proud to accept this offer of a St Martin ID Card and gladly accept my role as an agent of change” Lee concluded.

Leopold James explained that every year after the state of the union address the People’s Movement nominates five persons that they view to have made serious contributions to the island and who are committed to building the nation.  L

ee was one of the persons selected to be honored this year.  James acknowledged that there is a lot of misconception that the St. Maarten Grassroots Movement is about exclusion but he dismissed these misconceptions explaining that the Movement embraces everybody who is committed to building a better St. Maarten despite gender or race. During the speech James also said that during the past years, he did not like Lee as a person in charge of the trade association. He said that due to his ethnic background, he does not represent the born resident of St. Maarten however after years of observing Lee; he noticed that his honesty and ways of dealing with several key issues were admirable.

James also noted that while the People’s Movement is committed to improving the lives of the grass roots people of St. Maarten, they are also committed to embracing and including people on the island who promote the cultural heritage and identity of St. Maarten. He added that the movement is looking to build St. Maarten and take the country to the next level and this cannot be done through a policy of exclusion but rather by embracing all like-minded persons.