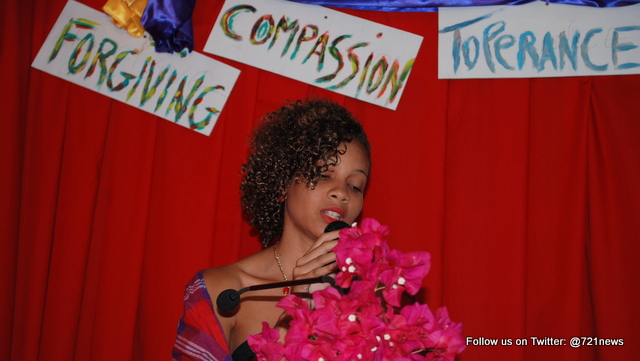 Philipsburg, St Maarten — Supporting the future” was the theme of the annual International Candlelight Memorial took place on Sunday at the Carl’s Unique Inn in Cole Bay on Sunday evening. The ‎St. Maarten AIDS Foundation together with Helping Ourselves in a Positive Environment HOPE organised the annual candlelight memorial.

Several speakers graced the stage, including key note speaker 16 year old Iris Hakkens who requested to keep the light burning for victims. The 2015 Candlelight Memorial theme calls on leaders to support the future of people living with HIV. Minister of Health Rita Bourne-Gumbs in her adress focused on the prevention of the disease. The minister wants the public to be more engaged with awarness factors.

Recipient of the Elton Jones award Rae Merlet Executive Director of the Aids Foundation was lost for words when called by foundation President Gérard van Och to accept the award. Merlet thanked the volunteers for assisting the foundation and wants more involvement from the community towards the activities of the foundation.

On World AIDS Day, December 1, 2014, the Global Network of People Living with HIV (GNP) unveiled the theme for the memorial. This annual mobilization campaign has been taking place every year since 1983, led by coalition of community organizations globally, and is coordinated by GNP.