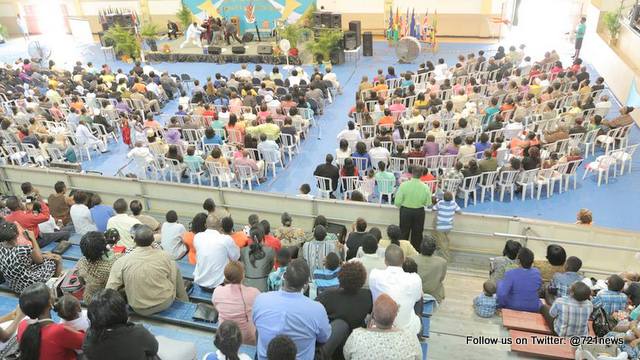 PHILIPSBURG/MARIGOT– It was a spectacular end to what may have started as the usual gathering of the St. Martin Believers’ Connection Convention (SMBCC). The 9th Edition of the local church’s calendar activity was hosted at the L.B Scot Sports Auditorium under the theme “Out of the Ordinary comes the Spectacular!” The godchild of the St. Martin United Ministerial Foundation (SMUMF) and the French Federation of Churches (FEDOC) saw participants converging from both sides of the island, as well as neighboring Anguilla, St. Kitts, as far south as Aruba and Trinidad and Tobago and up north in the mainland United States and Puerto Rico.

“The church’s participation continues to be more significant with each passing year and it is not so much on the quantity of attendance but the quality and diversity of attendees, all of whom want to model morally sound, peaceful and prosperous lives,” visionary Apostle Leyland G. Sam said.

He added that he was heartened to see that so many international participants had accepted the invitation to “fellowship with St. Martin” and made a case, once again, for a stronger focus on ‘religious tourism’.
“Many people come to the island for Carnival, SMBCC is an alternative to Carnival and religious leaders who visit our shores are always in awe of the natural beauty and passion for Christ displayed in this nation. We know that this territory is special to God and we can anticipate him doing something uncommonly wonderful for our 10th anniversary as we avail ourselves.”

Fresh off of a weeklong conference that was headlined by Bishop Robin Dinnanauth of New York’s Robin Healing Ministries, the steering committee of SMBCC has already begun preparations for next year’s event, with some minor changes such as venue and acoustics.  Apostle Sam sits on the steering committee along with Apostle Lewis Constant, Apostle Edwin Arrindell, Prophetess Marva Sam, Pastor Jerome Thomas, Ministers Dian Douglas, Angie Pantophlet and Donna Morrison-Wilson.

Public relations officer Torana Granston said that the number 9 has special significance naturally and spiritually; often associated  with the preparation for new birth. She said that this year, SMBCC 2015 was able to realize the installation of its official Secretariat, the hosting of the first gala dinner at Port-de-Plaisance, the opening of a resource centre for convention materials and published spiritual and educational works, a mini exhibition during each day’s activity and a strategic partnership with the Ultimate Fitness Gym for the launch of a Christian aerobics gym.

“All of these achievements were realized at a significant time in the Convention’s development, our 9th anniversary. Our aim is not only to meet in a mutual setting with the collective goal of worshipping God and interacting with fellow believers. It is also to meet the needs of the total man; physical, spiritual and mental. I believe that we are well on our way to building bridges in the society. It is all about empowering, equipping and fellowship opportunities,” she stated.

As is customary, the opening ceremony of the Convention featured a parade of nations with the Christian flag leading, a youth talent night, singles and marriage seminar, healing and deliverance services, a unity service and mini expo.

Awards of appreciation were also handed over to Dian Douglas for her long and dedicated service in the hosting of Convention and Roberto and Arlene Wilson of 98.1 Pearl FM in the area of community development.

“I was especially pleased with the level of expertise and wealth of experience that Dr. Annette Lazarus-Rose of Bethesda Healing Centre in New York brought to the singles and marriage seminars. As a trained counselor she really gave sound guidance and direction to the lives of people. No area was neglected as she discussed the financial, emotional, social, spiritual and clinical factors that accompany living single or living married. We all left feeling empowered,” Morrison-Wilson said.

The Convention steering committee thanked all those who made the 9th Annual St. Martin Believers’ Connection Convention a success, especially the numerous volunteers, sponsors, governmental agencies and churches who showed unwavering support for the vision and mission of SMBCC.