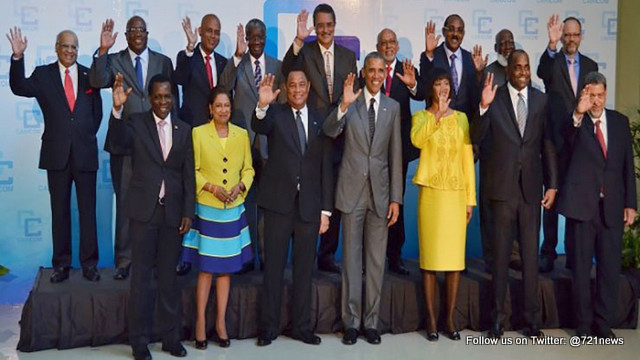 KINGSTON, Jamaica, Friday April 10, 2015, CMC – US President Barack Obama on Thursday announced a US$20 million effort to jumpstart private and public sector investment in clean energy projects in the Caribbean and Central America.

Obama made the announcement as he wrapped up a visit to Jamaica where he held bilateral talks with Prime Minister Portia Simpson Miller and then met Caribbean Community (CARICOM) heads of government.

“If we can lower these costs through the development of clean energy and increased energy efficiency we could unleash, I think, a whole host of additional investments and growth,” Obama said.

The proliferation of illegal guns in the Caribbean, trade, immigration and energy security were some of the other topics discussed by Obama and CARICOM leaders.

In her opening statement to the summit, Simpson Miller called for a stronger relationship between the US and CARICOM.

While CARICOM Chairman, Prime Minister Perry Christie of the Bahamas, said crime and security are major issues for the region.

At a town hall meeting with young people at the Mona campus of the University of the West Indies, Obama highlighted an initiative to support leaders and entrepreneurs from the Caribbean and Central America.

The programme, valued at US$70 million is expected to focus on education, training and entrepreneurship.