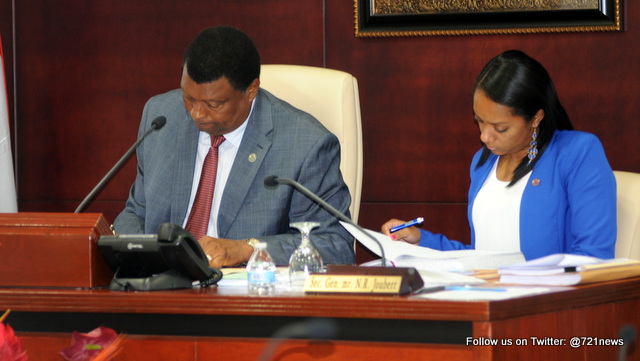 PHILIPSBURG–“Looking forward to further discussion” was the point Members of Parliament (MPs) reached on Wednesday night after hearing answers to shared main points of concern given by Justice Minister Dennis Richardson during a public meeting of the Central Committee of Parliament on the draft National Ordinance for the establishment of an Integrity Chamber for St. Maarten.

Although many individual questions had been posed, paired with statements of concern about what the Ordinance will mean for St. Maarten, most MPs expressed concern about consequences and limitations in practicality on the Integrity Chamber, and the fact that some believe the Netherlands is shoving it down St. Maarten’s throat.

After Minister Richardson addressed the concerns, most MPs expressed willingness to go forward with the draft law pending further discussion and possible changes, and the hope that it could be passed unanimously.

MP Cornelius de Weever said the lack of reference points and not being privy to details of past negotiations led to the type of standpoint MPs were taking.

In opening the session, Prime Minister/General Affairs Minister Marcel Gumbs said, amongst other things, that the law was not what the Dutch wanted, but was in the interest of the people of St. Maarten, and that action was needed to handle the country’s affairs rather than having them handled for us.

MP Tamara Leonard, the first to speak, questioned whether changes could be made or whether Parliament was there simply to ratify the Ordinance. She said that one unwanted consequence would be that local people would not be put in a position to succeed, not aspiring to be ministers or parliamentarians.

She said everyone on a small island was connected and “it cannot be that everyone’s integrity is questioned based on the actions of certain individuals.”

Others agreed that the focus on potential integrity violations should be more targeted, rather than “throwing the whole country in the same basket as a few politicians,” as put by MP Christophe Emmanuel.

“Go after the rogue politicians,” he said, adding that the Dutch did not have a problem with the people of St. Maarten, but with “integrity problems of this government.”

MP Silveria Jacobs enquired about the size, cost and feasibility of execution of chamber dealings. “Are we all going to pay for the errors of others?” she asked.

The sentiments regarding not being practical and fair on a small island resonated with other MPs. De Weever described his concerns that the local culture of being able to help and influence was being put at stake and said the idea sounded like “divide and conquer, but now by Dutch MPs.”

MP Silvio Matser expressed similar concern, asking what consequence the Integrity Chamber would have on the way of life, and said he would not like to see a “Gestapo situation” with people turning against each other.

Having “bad connections” or the thought of witch-hunt-type situations caused by perceived bad connections inevitably affecting most local people went against the grain of the MPs. They were concerned about the limitations this would place on local people, as not having any bad connections easily could favour foreigners, who naturally have fewer ties to the community.

This led to the question of what protection might be in place for persons under scrutiny. It was also asked what type of penalty, if any, would be given to people who falsely sounded an alarm, perhaps for personal gain. On the other hand, protection for whistle-blowers and penalties for anyone found to be covering up or foiling investigations were also amongst questions posed.

Local influence was also an issue of concern, with MPs asking whether local government had written the draft, or whether there was simply a template provided by Dutch technocrats.

Appointments to the Chamber were also questioned. MP Theo Heyliger asked what the criteria would be and how appointees would be chosen.

The MPs understood that the Chamber probably would consist of one local and two Dutch members, making it unbalanced.

MP William Marlin added a concern that the Chamber in turn could decide who would be in its secretariat, delegate responsibility to the secretariat and decide what power it had.

Matser suggested having five members rather than three, with three of the five being local.

MP Sarah Wescot-Williams requested information from a number of relevant documents and an update on research by Transparency International.

She also said the draft law should be made available in English as a matter of urgency, so that the people of St. Maarten also would be able to discuss it within their own means and ways while it was being debated by Parliament. This sentiment was shared by others as well.

Minister Richardson said he was “a bit confused” by the references made, including the chamber being pushed down St. Maarten’s throat, and that this was all the “result of advice from a committee that we as St. Maarten put into place, and that Government and Parliament have embraced recommendations of, among others, that committee. … It’s amazing to see, unless support fell away after elections.”

He said the MPs could make adjustments if valid points were given, that they did not have to simply accept whatever was put in front of them. The main decision, he said, is “whether the Integrity Chamber would be pursued, yes or no,” and that the MPs needed to consider the consequences and risks either way.

In line with opening comments made by Minister Gumbs, Minister Richardson said the consequence of not pursuing the law included the Kingdom Government imposing an Integrity Chamber and it becoming a purely Dutch matter. The secretariat also would comprise Dutch civil servants from the Netherlands.

He said the draft law had been embarked on long before the Dutch government started to look at it as a possibility. It is not based on “a Dutch template” and the Dutch are not happy with what is now the last point of negotiation, which is the local demand to provide legal protection to those subject to investigation: a judge would be allowed to see whether the Chamber would be acting within reason, this to avoid “witch hunts.”

Another condition given was that the Chamber itself could be subject to investigation.

He added that the “not me” attitude ignored “human frailty” and human nature.

Further answers will be given in another session on Friday. Minister Richardson took a break after answering the main concerns to ask whether Parliament was interested in pursuing the law, as further explanation made no sense if the MPs were against it.

It was already late night and it was decided the session would continue at 10:00am on Friday. Wednesday’s session started an hour late, as MPs wanted to review an amended version of the draft law that had been delivered late