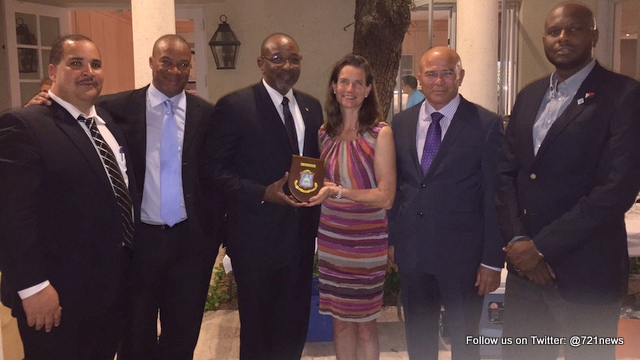 PHILIPSBURG, Sint Maarten – Minister of Tourism, Economic Affairs, Transport and Telecommunications (Ministry TEATT) Hon. Claret Connor, presented a token of appreciation on behalf of the people and Government of Sint Maarten to the Consul General of the Kingdom of Netherlands Consulate in Miami, Nathalie Olijslager-Jaarsma, who hosted a dinner on Thursday at her residence in Coral Gables, Florida for the Kingdom Maritime and Trade delegation.

The trade mission program started off with a visit to PortMiami where the delegation received a tour.  PortMiami has been ranked tops for Port Productivity and Performance in the 2014 edition of Top Ports in the United States published by the Journal of Commerce.

PortMiami is among America’s busiest ports and recognized across the globe with the dual distinction of being the Cruise Capital of the World and the Cargo Gateway of the Americas.  PortMiami contributes more than US$27 billion annually to the South Florida economy and helps provide direct and indirect employment for more than 207,000.

Minister Connor’s Cabinet Policy Advisor Louis “Rudy” Engel gave a presentation at the PortMiami regarding business developments in Maritime and Logistics. Delegations from the Netherlands, Aruba, Curacao and Sint Maarten were in attendance.

On Friday the delegations visited Miami International Airport where a number of meetings took place related to distribution and logistics.

Minister Connor pointed out that being part of the Kingdom trade mission allowed for the Sint Maarten delegation that included public and private sector entities to gather information with respect to Foreign Trade Zone status which offers unique opportunities to take advantage of a number of benefits which facilitates the free movement of goods.

Some of the benefits include according to Minister Connor: direct delivery upon arrival of the merchandise at the Port or Airport; elimination of unnecessary Customs Entry Fee’s, duties on exported products; expedited Customs clearance process etc.

During the dinner at the residence of the Consul General, discussions and business developments related to the aforementioned subject were discussed at length with respect to the Caribbean Basin region.

The Marine and Logistics Trade Mission were headed by the Prime Minister of Aruba Hon. Mike Eman and took place between April 16 and 17.