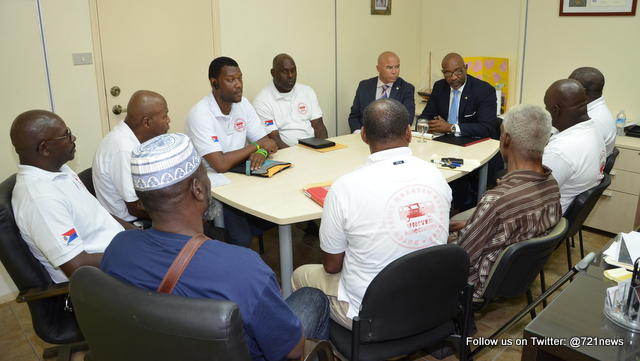 Minister Connor informed the bus drivers association that the Transportation Department is currently working on a policy document and the issues presented by the association during the meeting will be addressed in the policy.  This policy document will be ready in 2016.

The association was also informed that a working committee will be established to include department personnel and other stakeholders as an avenue to address on-going concerns.

The first point for discussion was the establishment of a Bus Terminal in the Philipsburg area.  The association is of the opinion that the terminal would alleviate traffic congestion on Back Street and Cannegieter Street.  Minister Connor said that such a terminal would lead to an improvement in services for passengers and will bring relief to congestion issues.

The second point discussed with Minister Connor is lowering of the speed control bumps in the district of Middle Region as the height of the aforementioned is causing damage to the busses when looking at the load factors.

The association says that attention is needed where it concerns gipsy drivers, and they have noticed an increase particularly on the Sucker Garden route. There have been some cases where bus drivers have been threatened with a weapon.  The bus drivers association has assured the Government that they are committed to servicing the route in Sucker Garden and Middle Region.

The route identification system was another topic that was discussed with Minister Connor.  The association indicated that they have a planned program ready to be implemented.

The association also brought to the attention of the Minister where several bus drivers are not licensed to service the Marigot and French Quarter routes.  Bus drivers, who are non-nationals, but hold residency permits for the Dutch side of the island, are prohibited from serving the French parts of the island.

The association mentioned that the French authorities frequently control the busses and when a driver is found to be transporting passengers without the proper documentation, they are seriously reprimanded and are told to turn-around and head back to the Dutch side.

According to the bus association this puts bus drivers of the Dutch side in a difficult relationship with French side authorities.

PHOTO CUTLINE: Minister Hon. Claret Connor (6th from left at the head of the table) with a member of his Cabinet and representatives from the bus driver’s association.