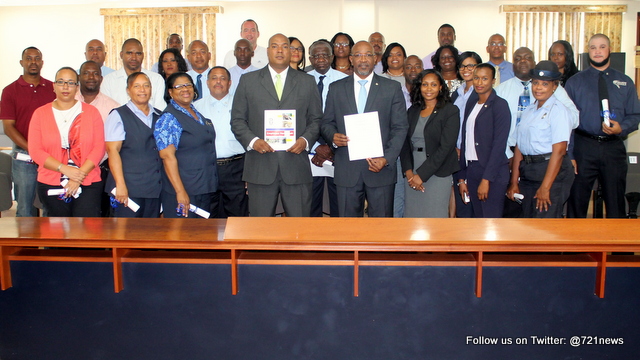 “I am very proud to be able to work with these professional women and men who have taken an oath to serve the people of this country.

“I have a great team to work with.  Some of them are new and many have been working for Government for many years.  Those who did not take the oath after Sint Maarten became a country back in October 20, 2010, have had the opportunity now to do so.

“Civil servants play an essential role in the functioning of Government and society overall.  Their role and responsibility are great.  I also take this opportunity to congratulate the other civil servants who have taken the oath,” Minister Hon. Claret Connor said on Friday.

The civil servants oath taking is part of the integrity process for the government structure of the country, one aspect being that all civil servants should have taken the oath when they were employed.

Civil servants who took the oath over the past weeks came from the Ministry of Public Housing, Spatial Planning, Environment & Infrastructure, Ministry of General Affairs, Civil Registry Department, Ministry of Finance and Facility Management.

The oath taking is part of the integrity compliance within the Personnel & Organization Department. The law acknowledges that and as a result requires that all public servants upon employment, upon changing of function or when acting in another function must take an oath.