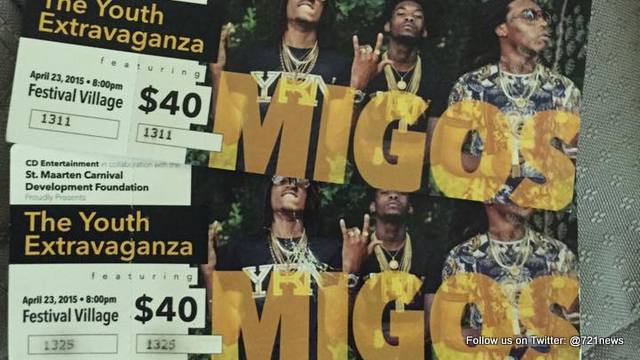 Migos Concert in Limbo; Promoters plan to move ahead with local talent

Philipsburg, Sint Maarten — Atlanta Hip Hop trio group Migos were arrested following the group’s appearance at Georgia Southern University’s Spring Bling concert Saturday evening. The “Versace” rappers were in the middle of their set when the stage manager told the DJ to cut the concert short because the police had arrived on scene.

Upon leaving the stage, Migos’ Quavo, Offset, Takeoff and their entourage were immediately questioned by authorities. Soon after, the two members of the group were arrested for felony possession of cocaine, Oxycontin and codeine plus charges of carrying a loaded weapon in a school zone.

CD Entertainment and the Carnival Development Foundation (SCDF) have sent word to the management of the group on whether there is any truth to the reports. The groups were set to perform for the popular Youth Extravaganza event scheduled for this Thursday April 23, 2015 at the Festival Village in Sint Maarten.

When asked by 721News room on the possibility of the show still going on CD entertainment Promoter Clarence Derby told our reporters, “We are looking forward to hearing from the management however we intend to cancel the artist performance if there is any truth to these allegations. The youth show will still go ahead because it will be a pity for our youth not to showcase their talent”.

Tickets for the event are US $40 and have been on sale now for the past week. Many fans have been posting their outrage and disappointed on social media. The St Maarten Carnival Development Foundation posted “Regarding Migos appearance at Youth Extravaganza: SCDF and Promoter CD Entertainment is assessing the situation and is in contact with Migos management. The situation is developing and should the charges be as serious as reported, then rest assured that the group will not perform at the event and we will proceed with Oswald as headliner along with our young SXM stars”.

According to the Bulloch Sheriff Department’s database, both Quavo (real name: Quavious Marshall) and Offset (real name: Kiari Cyphus) were arrested, booked and charged with four counts apiece. In Quavo’s case, he was charged with three felonies – possession of a schedule II controlled substance, possession of a firearm and carrying a weapon in a school zone – as well a misdemeanor marijuana charge.

Offset was given two felonies (possession of a firearm by convicted felon, carrying a weapon in a school zone) and two misdemeanors (marijuana less than an ounce, possession of schedule II controlled substance). Several members of Migos’ entourage were also booked. According to the Bulloch Sheriff Department, Quavo and Offset remain in custody pending a bond hearing.

Contributed to the story:Local section SXM-News-room, 721news and as International section Source Rollingstone.com