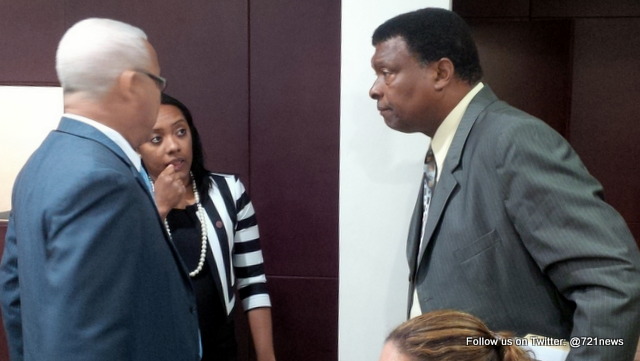 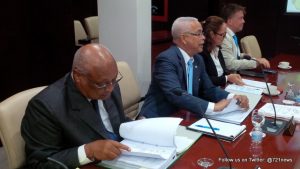 Story by Andrew Dick/ SXM News Room
PHILIPSBURG, Sint Maarten – Parliament met in a public plenary session today March 24.  This session was a continuation of the initial session that was held on December 22, 2014 and March 11, the meeting was called, but due to a lack of a quorum, it could not continue therefore reconvened today.
The agenda point is the request to the Governments Accountants Bureau SOAB to carry out a forensic investigation into the operations of the St. Maarten Housing Development Foundation (SMHDF); the decision of the board of the SMHDF to suspend several members of the management team and the request of the then Minister of VROMI, Maurice Lake to the SOAB to withdraw the current process with immediate effect.
This meeting was requested by the following parliamentary factions: National Alliance (NA) Member of Parliament (MP) William Marlin, Democratic Party (DP) MP Sarah Wescot-Williams, United St. Maarten (US) Party MP Frans Richardson, and NA MP Christopher Emmanuel.
The meeting opened with Prime Minister and Minister of VROMI Marcel Gumbs informing the members of Parliament that the housing foundation did not send the relevant information to his cabinet and that he will not be able to provide the necessary documents requested by the Mp’s.
MP William Marlin was not Happy about the ministers statements and requested an adjournment giving Gumbs more time to get the documents and information from the foundation. Marlin’s proposal was seconded and the meeting was postponed until April 7th. It is important to mention that no board is obligated to answer government.