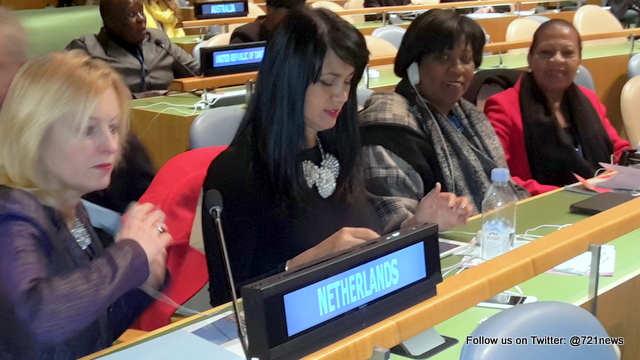 PHILIPSBURG, Sint Maarten – The Kingdom delegation to the 59th Session of the Commission on the Status of Women (CSW59) struck a powerful image to many in attendance over the last two weeks.

CSW59, which ran from March 9 to March 20 and was themed, “Beijing+20”, brought together country representatives and leaders of non-governmental, faith based and civil society organizations to review the Beijing Declaration and Platform of Action, adopt a new political statement, share information on their countries advances and challenges and offer opportunities for discussions on how to further emancipate and empower women in the coming years.

During the CSW59 time was allotted for each country to present a seven minute statement to the General Assembly on its vision for women in the next decades. Minister Bussemaker presented this statement on behalf of the Netherlands with the three other ministers sitting beside her. She was clear that while she read the statement it was on behalf of the entire delegation and Kingdom.

“Mister / Madam Chair, the Kingdom of the Netherlands consists of four autonomous countries: Aruba, Curaçao, Sint Maarten and the Netherlands. It is therefore that we are proud to be here together at this CSW with four ministers from all our countries and I feel privileged that I can make this statement also on their behalf,” Bussemaker read.

Bussemaker noted that while some advances had been made over the past years, there were still areas which needed considerable effort and collective input for improvements to be realized.

“Twenty years after Beijing we are forced to conclude that the position of women and girls around the world has improved only marginally.

This shows that agreements on paper are not sufficient. We need to achieve more if we are to ensure that women and girls can actually go to school. Can be financially independent. Can be free of discrimination. And can feel safe. As a society, we have to take our responsibility. This applies across the board: from governments to schools, from sports clubs to the United Nations,” she added.

“It’s up to us to support the brave women around the world who dare to take a stand to improve the position of women. The support we are providing through inclusive finance is an excellent example. By providing micro loans to help women set up small businesses, we are helping them to become financially independent. Alongside the old boys’ network, it’s time to establish a great girls’ network, and why not at a global level? Women need to help each other. Our generation stands on the shoulders of previous generations. It’s our duty to stand strong and offer that same support to the generations to come. Change starts with you and with me, and with what we do when we leave this room. We cannot hide behind organizations and institutions, and we cannot look away from what is happening in our own back yard,” the Minister read.

Then Minister ended by acknowledging the He4She campaign, which she said has been one of the most effective campaigns concerning gender in United Nations history.

“This campaign emphasizes that working towards equal rights is not simply a task for women. Men too can speak out in support of gender equality. One of many reasons why we should look to the future with hope!” the minister concluded.

After the statement many in attendance remarked that the presence of the four female ministers and their support staff struck a powerful chord with them, because the picture they presented illustrated exactly the kind of emancipation and empowerment of women that the Beijing Declaration and Platform of Action spoke about some twenty years ago.

Throughout the conference each minister had the opportunity to speak at different events and each acknowledged that while the Kingdom of the Netherlands has been and continues to be a forerunner in the women’s emancipation and empowerment movement there is still work to be done on all fronts in each of the four countries.