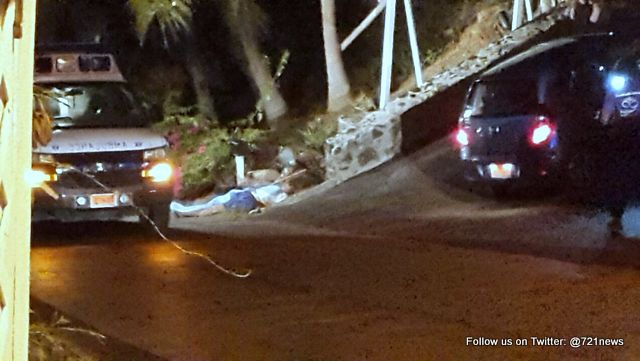 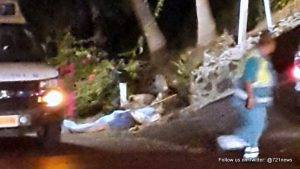 PHILIPSBURG , Sint Maarten – On Saturday March 22nd at approximately 11.20 p.m. a police patrol was directed to the Princess Heights to investigate a case involving a man who after stepping out of his car had fallen and injured himself and also not showing any signs of life. On the scene the investigating officers encountered the body of the male victim who indeed was not showing any signs of life. The victim had also suffered severe trauma to the back of his head. According to witnesses the victim was severely under the influence of alcohol and when he stepped out of his vehicle he lost his balance causing him to trip and fall from a height of approximately six feet over a low wall to the ground. Dr. Douglas arrived to the scene a pronounced the death of the victim. The Forensic Department was on the scene collecting evidence while Detectives are busy questioning witnesses to determine what exactly happened. The victim in the meantime has been transported to a morgue. The investigation is ongoing.

Intoxicated tourist loses his life at the entrance of Princess Heights, in Dawn Beach

Reports are saying he was driving a car when he notice he could not climb the hill at the intersection by the Princess Heights and Oysterpond road, he came out the car and lose his balance and fell.

Ambulance was called in but nothing could be done to revive him. Police and detective are busy with the investigation.