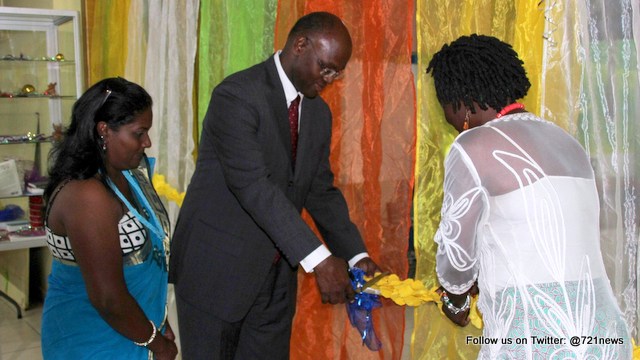 Positively Reuniting the Caribbean with Africa!

Great Bay, St. Maarten – On Saturday, March 21, 2015, the Africa Caribbean Heritage Alliance (ACHA) in cooperation with SXM DOET (a national volunteer initiative) and the National Commission of the UNESCO (UNESCO) and the Philipsburg Jubilee Library launched the First ever Africa Resource Center at the Library.

The launching of the Africa Resource Center is part of ACHA efforts to continue on its mission of assessing the feasibility of positively reconnecting the continents, His Excellency Governor Eugene Holiday cut the ribbon to officially open the Africa Resource Center. With the opening of the center he commended the SXM DOET organizers with the inclusion of this project in its island wide volunteers program and applauded the partnership between the African Caribbean Heritage Alliance, the National Commission for UNESCO and the Philipsburg Jubilee Library for the efforts to make this relevant heritage project possible. He expressed the hope that the center through centralized collection and availability of information will contribute to a greater knowledge, understanding and appreciation of the Africa-St. Maarten Heritage.

The program was facilitated by Ralph Cantave, one of the ACHA volunteers who found out about the project through the SXM DOET initiative. Ms. Brook, President of ACHA welcomed the participants noting that Africa as the second largest continent in the world after Asia with a population of almost one billion spread across 54 countries. Ms. Brook further noted that Africans and Caribbean people share much ancestral history and cultural heritage that provides a fertile ground for partnerships. Africans and people of African Descent are strategically spread across the entire globe. The Resource Center is a unifying point of convergence; a place and space where people can go to relax, to conduct research, to access certain resources or to watch a movie, listen to music or just to read a book that creates more awareness about the potential of Africa as it relates to the opportunities with the Caribbean, she concluded. In addition ACHA, on the occasion of their 1st anniversary, in collaboration with SXM DOET and the St. Maarten National Commission for UNESCO is organizing an art and essay competition among the high schools titled: The Role of Africans in St. Martin: Reconnecting the Caribbean with Africa. The winning entries from the high school pupils are scheduled to be announced on April 9, 2015. The deadline for the contest has been extended until Thursday April 2nd.

Other persons addressing the gathering included Monique Alberts, Director of the Library and Marcellia Henry, Secretary General of the National Commission for UNESCO. Mrs. Alberts spoke on the rich history of Africa and highlighted the array of literature available at the library that will contribute to the development of the Africa Resource Center. While Ms. Henry touched on a number of key matters including United Nations  Decade for People of African Descent noting that this declaration provides the opportunity for United Nations, UNESCO, Member states, civil society and other organizations  to implement programs and execute activities that focus and promote African ancestry’s recognition, justice and development.  Moreover, in proclaiming this Decade, United Nations and the international community recognize that people of African origin represent a group of people whose human rights must be promoted and protected. In doing so she like the other speakers emphasized that with the Africa Resource Center St. Maarten is joining the international community.

In her closing remarks, Ms. Brook thanked SXM DOET, Be The Change Foundation, Oranje Funds and Prince Bernard Foundation for making this event possible. Without the tremendous contributions of all the volunteers, this will not have materialized so well. All your volunteer efforts are greatly appreciated. Beyond this event, all the volunteers were reminded to continue to promote the Africa Resource Center to their friends and all the exciting upcoming activities of ACHA. Individually we can make a big change, but collectively, we can change the world for the better. Continue the facilitation, networking and recognition of volunteerism within the Sint Maarten society.

The program included poetry, speeches, book handover, and unveiling of the Africa Resource Center. The networking social was accompanied with servings of chicken jollof rice and pastries. More information can be accessed at www.afrocaribbeanalliance.org or like Africa Caribbean Heritage Alliance on Facebook or email ngumjo@gmail.com.