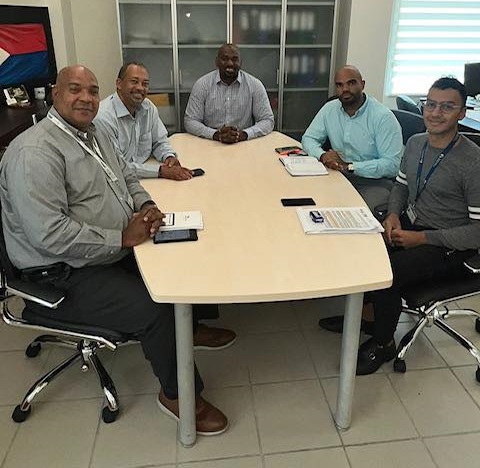 PHILISPBURG, Sint Maarten — Aviation Authorities of the Dominican Republic and St. Maarten have resolved the issues affecting airlifts between the two countries following the intervention of Acting Minister of Tourism, Economic Affairs, Transportation & Telecommunication (TEATT) Omar Ottley on Tuesday. Based on the resolution Ottley has given the approval for Director of St. Maarten Civil Aviation Authority Mr. Luis Halley to recall the letter he sent banning flights from the Dominican Republic as of August 5.

Minister Ottley held an emergency meeting on Tuesday with Foreign Affairs representatives for the Government of St. Maarten, the Secretary General of the Ministry of TEATT, the head of the Tourism Bureau, and the Director of Civil Aviation. The goal was to ascertain what resulted in the St. Maarten Civil Aviation Authority issuing the ban on flights from the Dominican Republic and to find a more amicable solution that does not leave thousands of passengers stranded for the summer.

Based on information gathered and the agreements reached, Ottley and his team advised the Director of Civil Aviation in St. Maarten to recall the initial ban on airlifts from Dominican Republic. A letter will be sent to the Civil Aviation Authority in the Dominican Republic informing them of the decision to rescind the letter banning airlifts effective August 5 and thanking them for allowing WINAIR to resume airlifts between the two countries.

“It must be clear that we are equally interested in the airlifts between the Dominican Republic and St. Maarten and will defend our goal to have our local carriers branch out to these islands to offer services reciprocally,” said Ottley. He said the two countries now have a mutual understanding, and it was agreed that WINAIR would continue its charter services to Dominican Republic and sell tickets there throughout August.

Airlines from the Dominican Republic can also fly to St. Maarten if their airlift agreement has not expired. Based on this agreement, Ottley said WINAIR would also be allowed to apply for a Commercial airline service license in the Dominican Republic, which it will receive once the airline complies with the required regulations.

“It is important that we understand the need to protect our own, which I believe was the premise of the letter sent in the first instance. However, we must also recognize that at times our actions can harm more than help, and therefore diplomacy is sometimes a better avenue of travel,” said Ottley.

Ottley said the same reciprocity goes for airlines from the Dominican Republic whose service agreements are still valid for St. Maarten or are requesting new service dates. 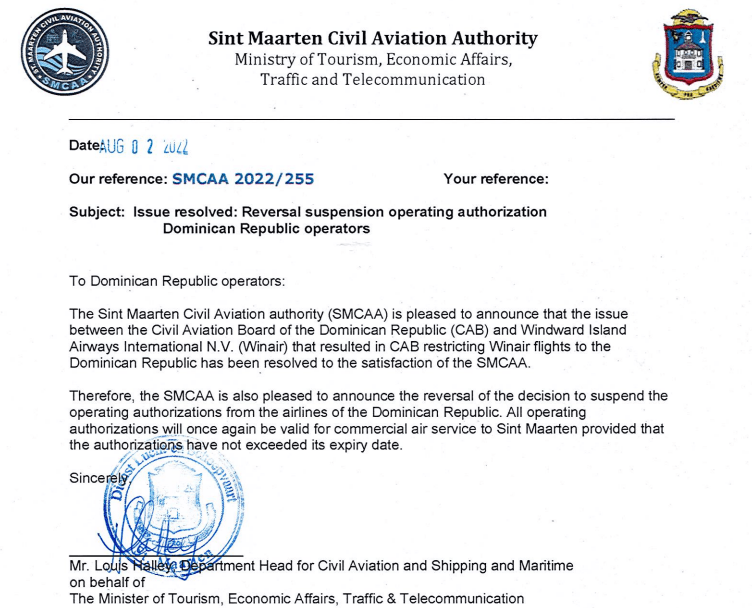