-Suspect still on the run- 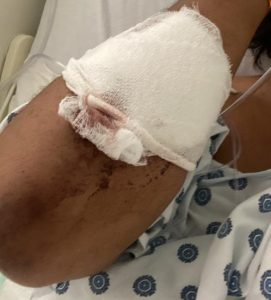 PHILIPSBURG, Sint Maarten — On Monday, May 30th, 2022 around 8:15 in the evening an incident took place where a 34 year old woman was stabbed by her ex-boyfriend Christian Jonathan Sosa, at her home on Pond Island. This incident happened in front of the woman’s 4 years old son.

The female victim explained that seemingly the man was in the neighborhood of her home waiting for her to reach home from work. Minutes after entering her house the suspect walked in her house and started an argument with her and during which argument he stabbed her 8 times. She managed to run outside followed by the suspect while being stabbed. Through the interference of a neighbor, the suspect stopped the savage brutal attack and left the scene.

The police were notified and arrived at the scene and started their investigation, while the victim was taken to the Sint Maarten Medical Center, where she underwent surgery because of the multiple stab wounds.

A few days after the incident as she was recovering at the Sint Maarten Medical Center, she was heard by detectives as she pressed charges against the suspect and provided the investigators with all relevant information pertaining to the suspect but up to now, no arrest has taken place. The victim is astonished by this fact, as she fears for her life. On several occasions she visited the Police Station and spoke to the detectives in charge of the investigation without getting any positive results.

In an interview with 721news, the victim of Dominican Republic descent, she explained her ordeal as she escaped dead at the hand of her ex-boyfriend who was also from the Dominican Republic, with whom she had a relationship for about 2 years. Nearly a month after the horrific incident she fears that the suspect might have even left the island and escaped punishment for the crime committed.

The victim has given the detective key information that the suspect is or was located on the French Side. Now it’s been said that the suspect fled the island by boat towards USVI. The suspect keep contacting her via social media. The French authorities were notified and are waiting for the official report from the Dutch side authorities to take action.
up to now no official KPSM Police report about this incident was ever made available to the media. The suspect is still on the run.