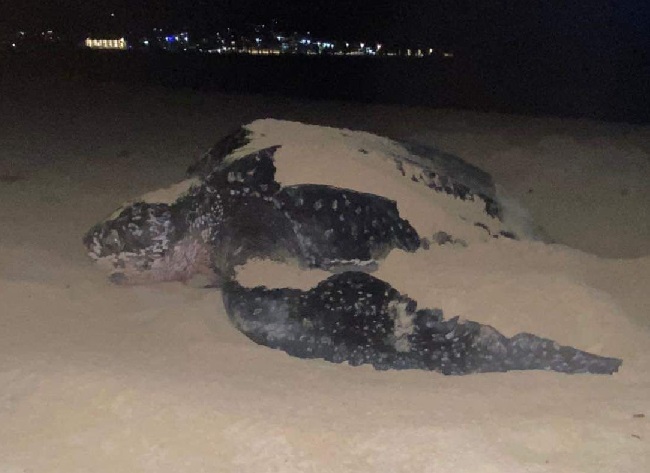 At the beginning of June, the Nature foundation confirmed the nesting activity of a Leatherback Sea turtle (Dermochelys coriacea) on Simpson Bay Beach. The Foundation received several reports from the public regarding a sea turtle being spotted in the area of Karakter Beach Bar, attempting to nest. Sea turtle nesting season occurs in St. Maarten each year from April to December, with some nesting activity happening outside of these months in recent years.

Female Leatherbacks, like most sea turtles, travel thousands of miles back to the area they hatched from to lay their eggs. They nest every one to five years, coming ashore several times and laying a maximum of 100 eggs. The eggs will incubate for about 60 days before hatching but unfortunately, even with the large number of eggs that are laid, sea turtles only have an estimated 1% chance of surviving to adulthood.

“Those visiting Simpson Bay Beach should stay clear of marked areas to give the highest chance of survival to any eggs laid” confirmed the Nature Foundation, “Driving on, walking over, placing beach chairs, or piercing umbrellas into the area of the eggs can cause severe damage to the whole nest. In addition to the Leatherback Sea Turlte which was spotted the first week of June, we have also had confirmed nesting activity of a Green Sea Turtle in the area of the Azure Hotel. With this increase activity in Simpson Bay it is even more important to protect the area and help these species nest successfully on our shores.”

The sight of a sea turtle coming ashore to nest is an incredible experience, but these endangered animals must be given space and left alone so they can lay their eggs successfully. This year, sixteen signs regarding sea turtle nesting have been placed at nesting beaches on St. Maarten. Look for these signs which explain the laws protecting them, challenges these species face, and best practices to support sea turtle nesting and hatching.

“If you see any sign of nesting or hatching activity, please contact the Nature Foundation right away. Stay at least 15m/50ft away from the turtle or hatchlings. Remove ant obstacles in their path but never stand directly in front of them.  Do not use flash photography or bright lights and keep other animals away. Remember it is illegal to touch, harass, or harm these animals or their nests in any way!” stated the Nature Foundation.

All sea turtle species are protected by the SPAW Protocol and the Nature Conservation Ordinance St. Maarten Articles 16 and 17. This means it is illegal to kill, wound, capture, or pick up sea turtles. It is also illegal to disturb their environment resulting directly or indirectly in a physical threat or damage or to commit other acts which result in disturbance of the animal. It is forbidden to disturb, damage, or destroy sea turtle nests, lairs, or breeding places. Also, it is forbidden, by the same law, to pick or destroy the eggs of any species of sea turtle. In short, it is illegal to disturb or damage the turtles, their eggs, or their habitat in any way.

The Nature Foundation asks everyone to be mindful of the threats sea turtles face and try to mitigate them, especially on nesting beaches. Never drive on our beaches with any type of vehicle, keep your distance from nesting and hatching turtles, minimize your use of single-use plastic and remove all trash from the environment, slow down your boat when traveling in the lagoon or coastal areas, and limit beach lighting during nesting season, which is from April until December. If an injured sea turtle or any sea turtle nesting activity on the beach is encountered, please alert the Nature Foundation. To learn more about sea turtles in St. Maarten visit our website naturefoundationsxm.org.