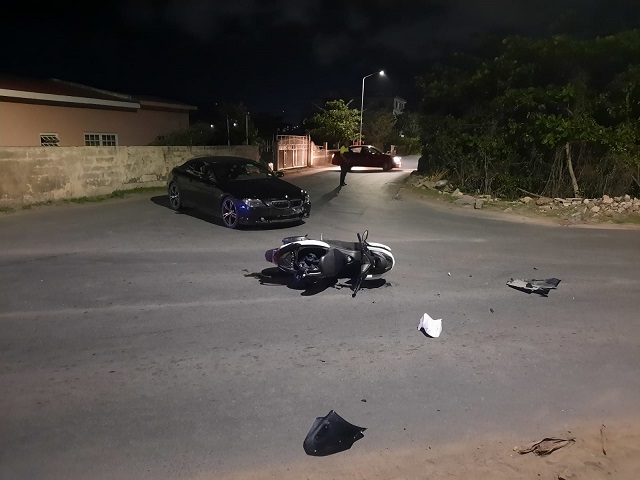 PHILIPSBURG, Sint Maarten (KPSM) — The Traffic Department of the Police Force of St. Maarten is investigating several vehicular accidents in which several people were seriously injured.

On March 26, around 6:30pm, a driver of the red Hyundai Elantra lost control of the vehicle and collided with the guardrail of the Simpson Bay Causeway. This occurred adjacent to the gas station on Union Road. The driver fled the scene. His identity is being researched by police. The overall investigation is in progress.

Another accident took place on Sunday, March 27, at 12:10am at junction of A. Th. Illidge Road and Arch Road. The driver of a blue BMW exited Arch Road and did not give way to a Yamaha motorcycle rider on A. Th. Illidge Road. Rider sustained a laceration to the right side of his head. He was treated by paramedics at the scene.

A traffic collision occurred on Welfare road on Monday, March 28, at approximately 2:30am between a white I-10 and a gray caravan. The I-10 driver suffered a wrist fracture. The driver was administered at the scene and then transported to the hospital for further medical treatment.

At approximately 6:00pm on Monday, March 28, Police Central Dispatch received several calls about an accident involving a scooter rider on Airport Road. The accident was between a white Kia Picanto and a black scooter. The Picanto driver overtook a line of cars and crashed into the scooter. The driver fled scene after collision. The traffic department is investigating this incident.

On Tuesday, March 29, around 9:30pm several reports were received about a serious accident at the junction of A. Th. Illidge Road and Zorg-en-Rust in Dutch Quarter. Two motorcyclists were seriously injured after colliding with each other. Police patrol found two men lying on the road suffering from some serious injuries. Both received treatment at the scene and were transported to the hospital. One victims has a complicated leg fracture and other injuries. The other biker has a broken arm and shoulder injuries.