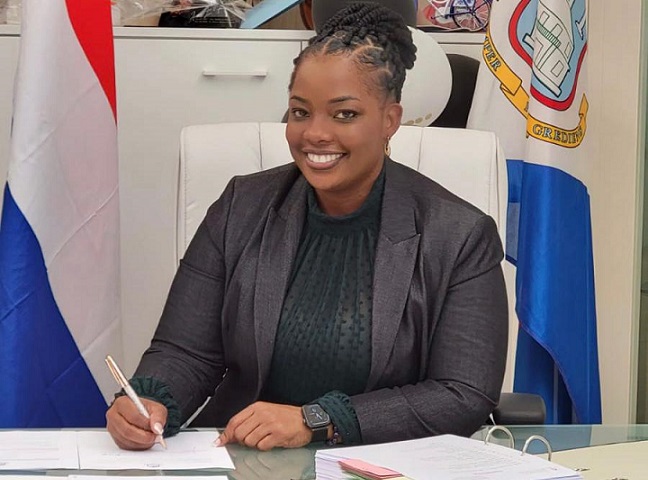 The legal position “Rechtspositie Regeling KPSM, amendments to the Police Ordinance (Politie Landsverordening), the Organization decree for the Justice Ministry (Organisatie besluit Justitie), and several decrees relating to the Immigration & Border Protection Services have all been completed and is on the legislative route. As such, the focus will now be geared towards the completion of the “Rechtspositie regelingen, and the new salary tables (Bezoldigsbesluit).

The newly approved and established Function Book will be seeing some updates in the foreseeable future as departments such as the Court of Guardianship, Judicial Institutes of Sint Maarten (SJIB), Miss Lalie Center (MLC), and the Law Enforcement Institute of Sint Maarten formerly known as the Justice Academy, requires an update to the LIOL incorporating them and thereby must first be approved by the Parliament of Sint Maarten. The steps are underway for this process to be completed.

Minister Richardson stated, “The date 12-20-21, marks a monumental day for the Ministry of Justice, the personnel of this ministry and by extension, the people of Sint Maarten. Technical staff and monitoring bodies engaged in a very meticulous process to ensure that the proper legislative process was carried out for the long-overdue function book of the Ministry of Justice. From the onset, I had taken a firm position that this process would be done the correct way to ensure the function book for the Ministry of Justice would be legally established eliminating any further inconsistencies, stagnation and instability for the personnel of this ministry. With the teamwork and input of many, this goal has been achieved.”

Upon taking office in March 2020, Minister Richardson made the function book her number one priority. The function book has been an unresolved matter since 10-10-10 and has contributed to various challenges (also legally) within the Ministry of Justice. It regulates an important part of the legal status of each civil servant which ultimately defines their task, responsibilities and their salary scales.

On December 22, 2020, just three months after the installation of the workgroup, the Ministry of Justice’s Function Book was handed over to the Committee of Civil Servants Unions (CCSU) for their review and advice as required by law. After having received feedback from the Progress Committee, the Committee of Civil Servants Union (CCSU) and the unions representing the civil servants within the Ministry of Justice, the function book was submitted to the Council of Advice for a legal review before it was approved by the Council of Ministers on May 11th, 2021.

Based on the advice of the Council of Advice, the Minister’s retained attorney together with the unions sat and made the necessary adjustments to which all parties agreed and signed a statement of assent on July 28, 2021, confirming their agreement with the updated draft.

With the approval and signatures of His Excellency Governor Holiday and Minister Richardson, the function book will now be heading to the office of the Ombudsman for a period of six weeks, whereby a constitutional review will be done to review the laws that were ratified. Additionally, Minister Richardson will be presenting a detailed description of the next step by step process to be followed during the upcoming budget debate in Parliament in January 2022.

“I’d like to give a heartfelt thank you to the Council of Ministers, the Ministry of Justice, the Ministry of General Affairs, the Secretariat of the Council of Ministers, the Unions, His Excellency Governor Eugene B. Holiday, and his Cabinet, my legal team, the Progress Committee and Council of Advice and all stakeholders who played a role in making this day a reality. I take this moment to bid each and every person who makes up the staff in service to this Ministry and to the country as a whole, a heartfelt CONGRATULATIONS. There is still more work ahead to be done, however, rest assured, I am committed to seeing it through,” concluded Minister Richardson.