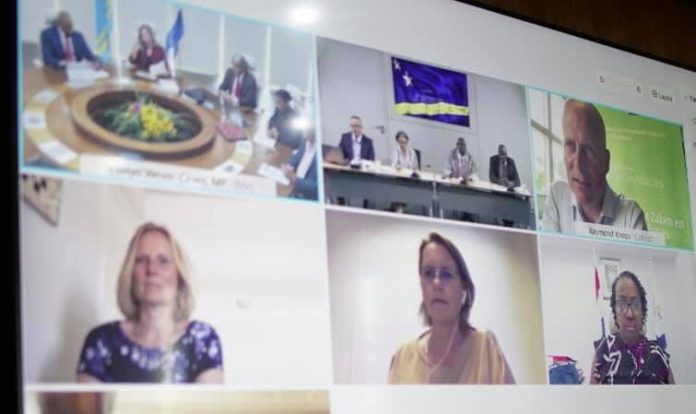 Philipsburg, Sint Maarten — The Prime Ministers of St. Maarten, Curacao and Aruba have been participating in Four-Country Ministerial Consultations together with Demissionary State Secretary of Interior and Kingdom Relations Knops since July 15th to discuss the remaining items of concern of the countries on the proposed amendments to the Consensus Kingdom Law.

In March of this year, the Council of State confirmed many of the concerns of Sint Maarten and the other countries pertaining to the content of the law. Since then, from March 26th until July 19th, many adjustments have been made and discussions have taken place on a technical level to come to principal agreements on the best way to address these concerns raised and finalized in the proposed further report.

On Thursday, July 22nd, the second Ministerial Consultation took place on the remaining points of concern. Consensus was reached on two of the remaining three points of concern, namely, the appointment procedure of management of the Caribbean Organization for Reform and Development (COHO) and the instruction authority of the Ministry of Interior and Kingdom Relations. The remaining point referred to having sufficient consideration for the basic needs of the country when granting liquidity support and the need to build reserves. This point was raised by St. Maarten and was sent back to be discussed on a technical level, which was finalized in a meeting held on Friday, July 23rd.

Prime Minister Silveria Jacobs stated, “St. Maarten is thankful for the hard work put in by the technical teams, and continues to stress the importance for all to come to an agreement. The Netherlands has expressed their willingness to address the remaining point. Once this point of concern is resolved, all major concerns of St. Maarten would have been addressed leading the way to a compromise; one that would give the countries enough confidence to move forward where the law is concerned.”

An internal review by the respective governments and their Council of Advice will follow and thereafter, the intention is to send the documents to the Kingdom Council of Ministers (RMR) by September 3rd.

“This is a consensus law in which all four countries in the Kingdom must participate, however it will have a direct impact on the three Caribbean countries. As such, government will continue to strive to ensure that we can receive as much as possible, while upholding our laws, in the best interest of the people of St. Maarten,” concluded Prime Minister Jacobs.