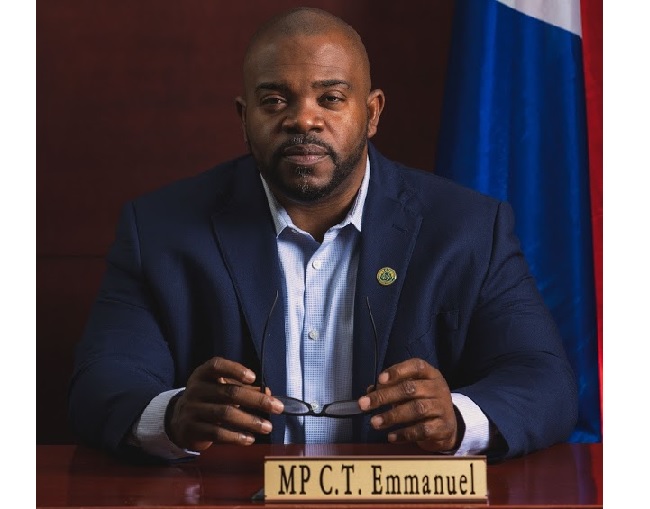 PHILIPSBURG, Sint Maarten — Independent Member of Parliament Christophe Emmanuel on Tuesday had only four words in response to reports that the Council of State has determined that the COHO is in contravention of the Kingdom Statuut: “I told you so. And I’ve been telling the government and the people of St. Maarten so since November 2020. This government is careless and an embarrassment unto itself.”

MP Emmanuel is the only Member of Parliament who has vehemently stated his position against the COHO and the only MP to vote against the three laws cutting income and benefits of civil servants and workers at government owned entities. He was also the first to be extremely critical of the country packages that support the COHO, having asked well over 100 questions to date and pointing out several instances of infringement on St. Maarten’s autonomy.

News broke on Tuesday that the Council of State has advised State Secretary Raymond Knops not to present the COHO legislation to the countries (St. Maarten, Aruba and Curacao) in its present form as it goes against the Kingdom Statuut. The Council of State in its advice states that the approach of Knops is inappropriate and doubts that the design of the COHO will lead to intended and successful results.

It also decried giving far-reaching powers to an army of Dutch officials which would weaken the countries not strengthen them. The Council also considers that the law gives the Netherlands too much scope to change the rules of the game, during the game by unilaterally changing the conditions for further support.

MP Emmanuel called both State Secretary Knops and Prime Minister Silveria Jacobs as deceitful since both knew of the advice from the Council of State. He explained that Knops knew about the advice since March 3, 2021 and still proceeded to ask St. Maarten’s PM to re-affirm her commitment and that of Parliament. In fact, the President of Parliament had already submitted a letter to Knops rubber-stamping Parliament’s support for COHO and the country packages.

The Prime Minister and the coalition, Emmanuel continued, received the advice since Friday last and to date neglects to mention it to Parliament and the people of St. Maarten. “It is plain out deceit from a government and their Dutch partners hell-bent on making the lives of St. Maarten people harder,” he said.

Emmanuel, who is the only MP to outright dismiss the COHO and the only MP in Parliament to vote against the country packages that support COHO, wasted no time in re-iterating what he has been saying for months: “The COHO is a heavy-handed, colonial construct by the Dutch, supported and pushed onto the people of St. Maarten by the Prime Minister of St. Maarten and the MPs in Parliament who support it and the country package.”

“It is clear that the government of St. Maarten, lacking any creative ideas to pull St. Maarten out of an economic funk, foolishly agreed to these measures that trampled on the autonomy of the country. This government and their support in Parliament chose not to fight for the people of St. Maarten. They made jokes that only one disgruntled MP stood against. That’s ok. At least I wasn’t afraid to stand for my people,” Knops.

The MP stressed that if the COHO is questioned and is problematic, so should the country package, the three laws to cut civil servants income and benefits as well as the presence of the temporary working organization which is now active and moving ahead with so-called reforms. “If the setup of the COHO is problematic, so should everything that supports it,” Emmanuel said.

“Anyone with common sense could have read the COHO document and concluded exactly what the Council of State have Concluded. Instead you have coalition MPs saying that they are waiting for it to come to Parliament, while they could have already pressured the Dutch to do away with it and perhaps come to better means of support. Their actions are treasonous,” Emmanuel said.