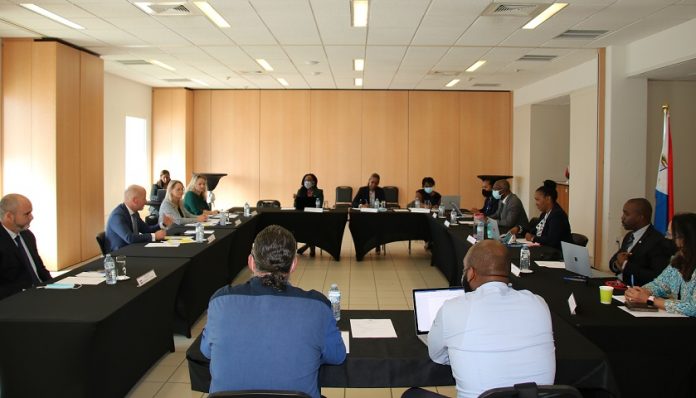 Philipsburg – On Thursday, January 7th, Prime Minister & Minister of General Affairs Silveria Jacobs, Minister of Finance Ardwell Irion, Minister of Justice Anna Richardson, Minister of VROMI Egbert Doran, and their support staff met with State Secretary of Interior & Kingdom Relations Raymond Knops and his delegation in a series of meetings at the Government Administration Building to update and follow-up on agreements made prior to the end of 2020. The Dutch delegation consisted of Dutch Representative Chris Johnson, Country Director-General of Kingdom Relations Saskia de Reuver and Acting Program Manager for St. Maarten Sanne Kouwenhoven who are appointed to the Temporary Working Organization (TWO) of BZK awaiting the establishment of the Caribbean Organization for Reforms and Development (COHO).

Both delegations were able to convey their support and eagerness to begin this process while emphasizing the long and challenging road ahead to realize the ambitious Country Reform package. The Ministers specifically took the opportunity to highlight areas of importance for which work and collaboration are immediately needed as well as to outline their hopes and intentions for the many projects that can be implemented under the umbrella of the Country Packages. During the working visit, State Secretary Knops and his delegation were also introduced to government’s newly implemented and approved structure for the discussions regarding the Country Package. The structure consisting of a Monitoring Committee and Secretaries General Platform/Consultation was explained giving an indication of communication lines with counterparts in the TWO established by the Dutch.

“The government of St. Maarten, including Ministers, Secretaries General, Department Heads and civil servants, will all play a major role in the planning and execution of the reforms ensuring that the subsequent programs and projects have the interest of St. Maarten and its people first and foremost and have our input from the beginning,” stated Prime Minister Jacobs. As such, the St. Maarten government representatives will commence meetings on a technical level scheduled for today, Friday with the Dutch TWO and will continue Monday and Tuesday to deal with the most urgent matters with upcoming deadlines.

During the first meeting, Prime Minister Jacobs and Minister of Finance Irion were able to provide State Secretary Knops and his delegation with an update on meeting the conditions for the second and third tranches of liquidity support. Furthermore, the reconstruction via the Trust Fund was discussed along with progress and challenges. Prime Minister Jacobs also highlighted gratitude to the Dutch Government for the areas of collaboration in the matters related to public health and the COVID-19 response, as well as challenges that still exist in relation to needed personnel and the roll out of the COVID-19 vaccination strategy of the Kingdom and St. Maarten. These topics will be further elaborated on in the technical meetings to be held in the coming days.

The State Secretary Knops provided an update on the status of the COHO draft legislation law, upon the query of the Prime Minister, which is still at the Kingdom Council of State and confirmed that St. Maarten’s questions were added to those of the other Caribbean Kingdom partners. The timeline moving forward was also briefly discussed, including the trajectory for the draft law to be handled in all the Parliaments in the Kingdom after the Council of State has rendered their advice. Throughout the negotiation process, Prime Minister Jacobs has sent all documents pertaining to St. Maarten’s Country Reform package to Parliament and has also kept the members of Parliament updated on a regular basis about the conditions agreed upon for the second and third tranches of liquidity support.

In subsequent meetings held, the Minister of VROMI Doran highlighted several matters in relation to the Trust Fund’s Emergency Debris Management Project (EDMP). Solid waste management, challenges at the Landfill, as well as the challenges being faced with the resettlement of residents living near the landfill were among the issues discussed. Challenges experienced with the World Bank regulations and the necessity of awaiting their input and approval to be able to proceed in areas needing immediate attention requires real collaborative efforts on all sides to get this project moving, seeing the three years that have already elapsed.

In the meeting related to pending Justice matters, Minister of Justice Richardson discussed matters in relation to the working relationship with UNOPS which is the organization proposed to build and manage the new prison. Minister Richardson also discussed the collaboration of our law enforcement and immigration matters and there was agreement that much of the follow up would be done in the upcoming Kingdom Ministerial consultation in the JVO meetings.

“This marks a new beginning for the Netherlands and St. Maarten as we embark together on this mutual agreement. The government of St. Maarten identifies and acknowledges the opportunity to make St. Maarten resilient through structural reforms. As such, we are developing our implementation strategy for the package of reforms which is to be complementary to the projects and initiatives already in place via the Trust Fund and World Bank,” stated Prime Minister Jacobs.