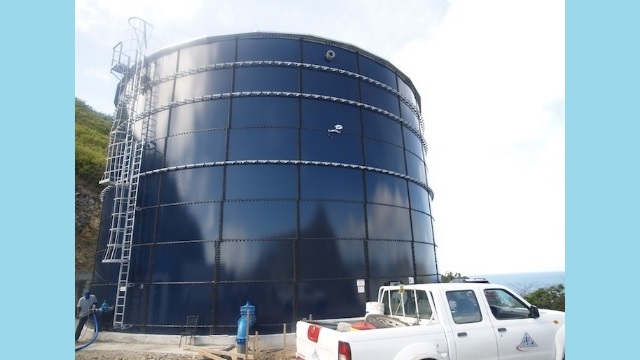 PHILIPSBURG, Sint Maarten — NV GEBE, in its continued commitment to address the basic needs in the areas of water, is ensuring that the community of St. Maarten will have access to the supply of water to meet their daily needs such as for cooking, drinking, bathing and washing.  Prior to Hurricane Irma in 2017, NV GEBE had 15 water tanks with a storage capacity of 3 days which met the demand of the community.

Traditionally, it has always been common practice to keep water tanks in a full or near full condition to meet peak water use periods and for emergencies such as storms, however, all that changed in 2017, when Hurricane Irma damaged 9 of NV GEBE’s 15 Water Tanks leaving the water infrastructure in a crippled position. The water storage for the island was then reduced to less than half a day storage due to the magnitude of the devastation.  Immediately after Hurricane Irma NV GEBE and the tank manufacturer met to discuss the possibilities of making the tanks more resilient in order to withstand storm winds of 200mph and up.

In collaboration with the tank manufacturer NV GEBE was able to restore 5 of the 9 damaged tanks within a two year period.  With the 5 of the 9 water tanks now constructed NV GEBE now has a water storage capacity of 1.9 days.  NV GEBE is currently constructing two more tanks, one in Madame Estate and the other in Lowlands.  The Madame Estate Tank which is constructed at Claude Estate, will be a gravity feed to the Madame Estate and Middle Region areas and pumped to clients residing higher than the tank.  These two tanks will add to the much needed minimum daily storage capacity which based on the world standards should be around 3 days.

The Concordia tank will be used to feed the higher areas in St Peters where NV GEBE has its challenges to keep a sustainable water pressure during the day.

Once the latter has been completed it leaves 2 more damaged tanks to be repaired in 2022 namely; the Monte Vista and Pelican tanks. Then there is a remaining tank to be replaced that is currently still in operation, namely the Cay Bay 2 water tank which was constructed in 1974. This one will be left for 2023 and will have a volume of 4200 m3 (923,870 Gallons).

The tanks that are being constructed are high efficient and low maintenance tanks as they are made from glass coated metal sheets. This method is called Glass Fused to Steel. The roof, the dome as it is called, is made of high grade marine aluminum alloy beams and sheeting. The tank dome is designed to rid of the aluminum sheets in order to protect the dome frame against damage from high winds during a hurricane. The volumes of the tanks range from 1,500 m3 (329,953 Gallons) to 4,200 m3 (923,870 Gallons) with currently a maximum operational capacity of 26,946 m3 (5,927,291 Gallons) to be increased to approximately 44,000 m3 (9,678,647 Gallons) in 2023.

The current water production is an average of 16,200 m3/day that is produced between three (3) water plants. The plants are located in Cupecoy, Cay Bay and Point Blanche with the Point Blanche plant being the newest plant. Each one of these plants makes drinking water out of seawater via a desalination process named Reverse Osmosis.

Reverse osmosis is the process of forcing the seawater from a high solute concentration through a series of semipermeable membranes to a low solute concentration by applying very high pressure. The largest and most important application of reverse osmosis is the separation of pure water from seawater and brackish waters; seawater or brackish water is pressurized against one surface of the membrane, causing transport of salt-depleted water across the membrane and emergence of potable drinking water from the low-pressure side.

NV GEBE then adds chemicals to the water to prevent bacteria growth such as salmonella and more. This is being checked on a daily basis by NV GEBE lab department in collaboration with SLS lab.

In an invited statement, Dr. Sharine Daniel stated that the addition and completion of the new tanks will demonstrate NV GEBE’s unwavering commitment to fulfil one of the company’s strategic goals, otherwise known to the Management of NV GEBE as ensuring every citizen of this country has the ability to access water once they are a client of the company.

The Management of NV GEBE in this regard is making critical goals in improving the water tanks in several areas and by extension, the broader community of St. Maarten. 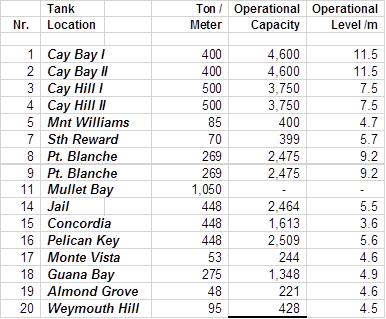 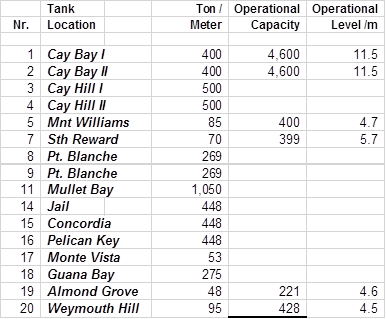 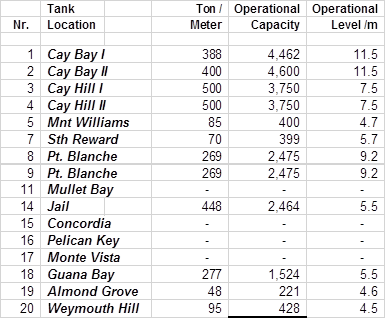