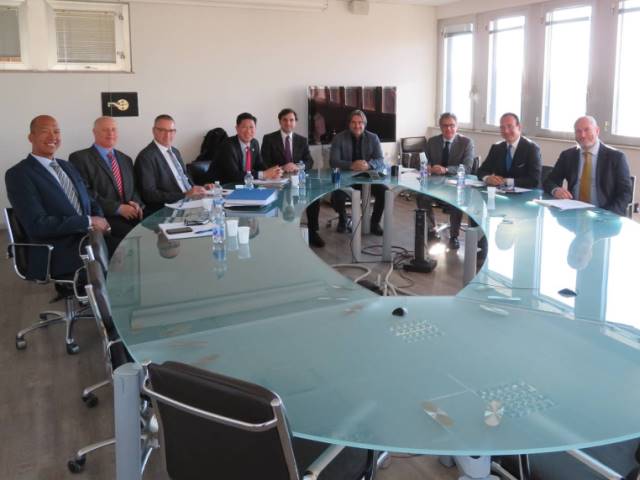 PHILIPSBURG, Sint Maarten — A delegation consisting of St. Maarten Medical Center (SMMC) and Minister Lee of VSA recently visited INSO, the general contractor for the new St. Maarten General Hospital (SMGH) construction project in their head office in Florence, Italy. Minister Lee initiated this trip directly after he was notified that INSO was admitted into the Extraordinary Administrative Procedure (EAP) to find out more details what the EAP entails for both INSO and SMGH.

During the meetings with INSO’s management team and representatives of the Italian Government, the St. Maarten delegation was updated on the EAP process that was initiated by INSO’s parent company Condotte d’Acqua (Condotte) last year to bring their strategic subsidiaries into their EAP.

Professor Bruno, one of the three Italian State appointed Extraordinary Commissioners for INSO, stated that the EAP is an effective program managed and backed by the Italian Government to safeguard strategic companies like Condotte and INSO including their workforce. The EAP protects INSO against its creditors and is aimed to provide INSO with a fresh and clean start without any old debts.

Mr. Luca Dal Fabbro, the newly appointed General Manager emphasized further that INSO is not bankrupt. As the EAP is a very specific procedure and only applied in Italy, there can be a lot of misunderstanding regarding the EAP but as a matter of fact, due to the EAP, INSO is and remains a financially sound company. The Italian government is financially backing up companies in EAP with guarantees (for instance: Euro 190 million in guarantees has been allotted for Condotte). At this moment, INSO does not need any financial support from the Italian Government as INSO is able to run its regular business operations.

INSO has an annual revenue of Euro 200 million and has built over 80 hospitals in over 20 countries worldwide. Currently, INSO has a project portfolio of approximately Euro 1.3 billion. INSO has been selected to build the new SMGH based on their technical and financial ability (as per the 2016 procurement procedure). INSO has been working accordingly, as can be concluded by obtaining the recently issued building permit from VROMI in approx. 3 months’ time.

At present, INSO is continuing business as usual: it recently won a new project in Malta and hired a new and experienced General Manager, Mr. Luca Dal Fabbro, to helm the operation going forward.

Professor Bruno disclosed that continuation of the company and its entire staff is an important priority of the Italian Government. Because of the EAP, INSO is now effectively a government company and INSO will either be restructured or sold as a stand-alone company (including its infrastructure, entire staff and project portfolio). Selling the shares of INSO will only be possible to a strong and capable buyer as the Italian Government is demanding strict guarantees from the new owner of INSO for a period of 2 years to safeguard completion of the projects and workforce. Professor Bruno expects that the EAP could be concluded in May 2019.

INSO and the Italian Government consider the new hospital for St. Maarten a strategic project and have the strong desire to start with the construction in February 2019 in line with the original planning.  The total construction time would be approximately 4 years (with the main building being ready in approx. 3 years). Mr. Bruno confirmed that all the regular guaranties and performance bonds will be in place as per the international FIDIC contract that was signed in September 2016.  Mr. Dal Fabbro added that he understands that the EAP procedure created a lot of commotion and discussion in St. Maarten as it was unexpected and new for St. Maarten.  Mr. Bruno stated during the meeting: “INSO and the Italian Government will do what is needed to restore trust and confidence with SMMC and its stakeholders including the lender’s consortium and demonstrate to St. Maarten that the new hospital will be build as planned and agreed”.

Minister of VSA, Emil Lee stated: “The meetings with INSO and its Italian state appointed Administrators were fruitful and our objective of getting more information were met. This is an important step in the right direction. We are working together with the Tripartite, the stakeholders and the lenders to find solutions to realize our much-needed hospital as per the planned timeline”.

Mr. Klarenbeek indicated that the next step would be to continue the discussions with the lenders of the SMGH project and the World Bank and to share the information that was received during the trip. Klarenbeek stated: “I’m confident that the lenders and the World Bank all have the same goal and that is securing the best terms and conditions for SMMC to build the new hospital. We hope that we can provide clarity on the next steps within the next couple of weeks. If we are able to find a definitive solution before mid-February 2019, we will not lose any time in the construction of the new hospital and we should be able to start using the main building per the end of 2021 whilst the wing and the parking facilities would be ready by the end of 2022”, he concluded.