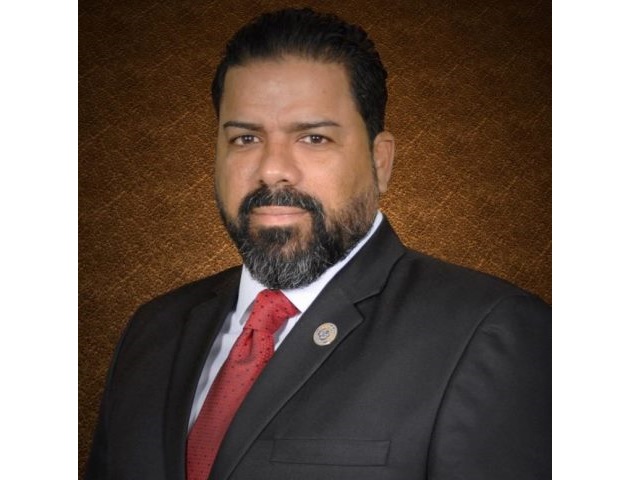 PHILIPSBURG, Sint Maarten — Faction Leader in Parliament for the St. Maarten Christian Party SMCP and Member of Parliament Claude “Chacho” Peterson has sought to explain his “sarcastic” comments during last Friday’s meeting of the Ad Hoc Committee for a New Parliament building during which he suggested that “if Mr. Marlin supported this project”, he would have his support to invite the Prime Minister and Steering Committee member to come to Parliament to discuss the World Bank financing the extremely expensive concept of a Parliament Plaza from the US$550 million Trust Fund.

MP Peterson said: ”Unfortunately my sarcasm did not resonate with those who saw my intervention in Friday’s meeting of the Ad Hoc Committee for the New Parliament Building. This was the first meeting of this committee since the new parliamentary year started and the first I ever attended. I came to the meeting expecting to get a presentation on a potential design of the New Parliament building and was very surprised to realize it was a presentation on a futuristic, very elaborate and very costly concept idea for the entire land between the post office, the old Government building and the Clem Labega square. As an Engineer myself, I could totally appreciate the vision of Mr. Damien Delano Richardson as a local Architect but it is definitely not in tune with our reality after Irma. I looked around to my Coalition MPs to see if they knew of this project but realized they too were seeing it for the first time. When I listened  to MP Marlin’s support for the project during his intervention, I figured it was not the first time he had heard about it. My main focus after the presentation was to find out if Mr. Richardson was commissioned in any official capacity to develop this concept and more importantly, my concern revolved around the very high monthly rent of $97,000 per month for the present Parliament building also alluded too in the presentation and the building of our own building in order to lower this cost. The high monthly rent was a deal put in place by now MP Marlin as a last minute resort to solve the failure to prepare  facilities to house Parliament prior to 10-10-10.”

MP Peterson’s sarcastic comments were more a reaction to the comments made by MP Marlin who elaborated on how this high priced project could be financed.

MP Peterson issued a statement on Sunday clarifying the misunderstandings that his comments caused and said he clearly understands why it was not well received. One of the main factors SCMP’s leadership took into consideration when deciding to join the United Democrats was the fact that they had decided to accept the Trust Fund money in order to start the rebuilding of St. Maarten and to assist the people. He is very aware that the Trust Fund money is particularly designated for projects which have to do with reconstruction and resilience post Irma as well as social projects to assist the unemployed persons in  the tourism sector, and the employee training program currently being executed at the National Institute for Professional Advancement (NIPA) since Irma.

Member of Parliament in The Hague Ronald van Raak has also expressed concerns about Peterson’s remarks. Van Raak has requested that the State Secretary of Interior and Kingdom Relations give assurances that the Trust Fund that was “meant to restore the infrastructure, repair people’s houses and fight poverty” is not used for a lavish futuristic building or for  parliamentarians to give themselves an expensive and luxurious gift.”

In response, MP Peterson said, “Like Van Raak and members of the community who are concerned about my comments, my priority since assuming the position of MP has been and remains ensuring that all the people whose roofs have not yet been repaired post-hurricane Irma, can still get their roof repaired and  receive financial support they need. I also want to see that our schools and shelters be made hurricane resistant, our sports facilities restored and improved as well as the capacity of our civil service strengthened among other things. I have also been critical of the slow pace of the reconstruction process with the World Bank but I remain committed to see the Trust Fund benefit our people and the island.  While I commend Mr. Richardson for his elaborate concept, I can not support such a grandiose structure surrounding the new Parliament building and would not want to use funds earmarked for the relief for our people to build it.”

MP Peterson believes that while there is a need for a new Parliament Building, improved public parking in Philipsburg and even a park for residents and visitors adding some greenery in the island’s capital, the main focus should be to get out of that huge monthly rent presently being paid by tax payers.”

MP Peterson, known for being outspoken as a social activist against nepotism and corruption, is presently the Parliamentarian on St. Maarten who gives 15% of his salary to various charities on the island each month since taking office in July 2018. The 15% of the gross salary amounts to Naf.2916.00. This is in line with the pledge taken by all SMCP candidates during last election and was also carried out by now Minister Wycliffe Smith when he was an MP.

MP Peterson has expressed his apologies to the people for any confusion his comments may have caused.  He hopes that the clarification of his “sarcastic”comments and the clarification of his opinion regarding the high priced concept presented on Friday will convince the public of his unwavering determination to see the reconstruction of St. Maarten done in a sustainable manner and the return of the people to work in a new vibrant economy. In the process to achieve this he fully expects to encounter many challenges uncovered by Hurricane Irma. His commitment remains to see the execution of the Governing Program of the St. Maarten United Christian Democratic Coalition entitled: “Building a Sustainable Sint Maarten”.