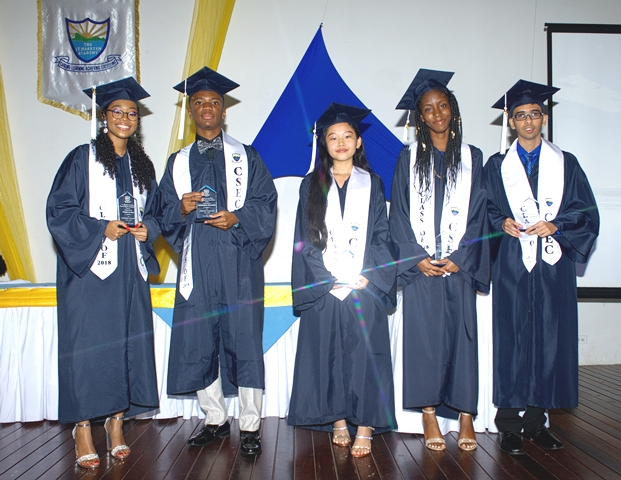 Emerging top of his class and even the island, was Chetan Laungani, who wrote 13 subjects, and attained Grade I passes in 11 subjects at the Caribbean Secondary Education Certificate (CSEC) examinations in May/June 2016. He was among 82 to graduate from the school’s CSEC programme, edging ahead of Naomi Jankee, who copped the salutatorian spot and Habeebullaah Mohammed, who was second runner-up valedictorian.

Of the 26 to graduate from the Caribbean Advanced Proficiency Examination (CAPE), 22 students earned an associate degree in either Natural Sciences, Entrepreneurship, Tourism, Information and Communication Technology, or Accounts. The best graduating student of the CAPE class was Jayni Suero, who moved the audience to tears with an emotional valedictorian speech about overcoming many obstacles in her life to emerge top of her class.

Suero, a former student of PSVE, recounted writing a letter in 2013 to then principal of Academy, Mr. Shareed Hussain, pleading to be accepted into the academic section as she had not passed the placement examination.

“When I graduated PSVE, I was looking towards doing the GED, but could not because I was only 16 years old and could not legally work just yet. I did the entrance exams for Academy along with my [three] best friends. I failed the exam, but my friends made it. I wanted to give up and do nothing. I ended up writing a poorly written letter to Mr. Hussain…and he gave me the opportunity to prove that I could do the work,” Suero said.

Once given that opportunity, she worked hard for the next three years and after writing the CSEC examinations in 2016, passed 11 subjects with six grade ones, four of which were distinctions; four grade twos; and a C in Dutch. She also copped the top spots in Principles of Accounts and Economics from among 60 plus business candidates, earning her the number two spot among the CSEC graduates as well as the accolade for the ‘Best Business Student’.

Suero did not stop there. She gained acceptance into the school’s CAPE programme and worked even harder during the last two years, despite missing the first term of her second year. Just after the devastating Hurricane Irma, Suero underwent a major surgery and was on the verge of dropping out of school, but credited the head of the school’s Mathematics Department, Mr. Alberick Arrendell, for encouraging her to finish. She recalled Arrendell’s mantra that “wasting time is a terrible thing to do,” and after her surgery in October 2017, convinced her doctor in the Dominican Republic that she was ready to return and complete her studies.

The driven young scholar recounted that upon her return to the island, the school had lost a teacher for three of her courses, but she did research and self-study to make up for the entire term that she had missed.

“We all had a choice to be negative and accept that we could fail, but the fact that we are here showed that we stayed positive. Every bad situation has something positive…that could influence you and give you some hope,” she told her peers.

Suero, who once again copped the ‘Best Business Student’ award, now holds an Associate of Arts in Business Studies degree, specializing in Accounts. She proudly acknowledged the sacrifices made by her immigrant mother, who came to St. Maarten and worked many years on the island, but still does not fully understand English.

“But she provides whatever she can for me. This shows that parents have sacrificed their days so that we can have our today and tomorrow,” Suero told the audience to a resounding applause.

She urged the class of 2018 to use their today wisely and to stay positive while making the choices that will impact their tomorrows.

“Whatever we decide to do today can determine how our tomorrow will be and how the rest of our lives will look,” Suero said.

Graduating in absentia as salutatorian of the CAPE class with an Associate of Arts degree in Tourism was Diamonique Cocks, who was named the ‘Best Humanities Student’. Cocks was recognized for her outstanding performance in Entrepreneurship Unit 1, while Shauntae Marcellin, the second runner-up valedictorian received the award for ‘Outstanding Community Service’. The ‘Best Science Student’ at CAPE was Rachelle Barrett, while the CAPE ‘Leadership’ award went to Genora Jankee, who shared the night with little sister, Naomi Jankee, the salutatorian of the CSEC class.

Of notable mention was the fact the many of the CAPE business graduates defied the odds, as Suero alluded to, when they were left without a teacher in three courses in January. Despite that, Entrepreneurship Unit 1 received 100% pass rate at the May/June examinations. Sixteen students sat this subject under the guidance of Mrs. Cameca Brown-Henry-Ranger who inherited the group three months before their final exam. Management of Business Units 1 and 2 also faced similar challenges; however, under the guidance of the one of the school’s Mathematics teachers, Ms. Denise Riley, the students performed a tremendous task by completing the syllabus and obtaining a 100% pass rate in both units. The same was the story for Accounts, which saw the addition to the teaching staff of Ms. Adecia Rutherford, three months before the final exam, and once, again, the students pulled through and secured a 60% pass rate.

The celebration Tuesday night was also to recognize CSEC candidates whose examination results were touted to be the best in years despite the challenges many of them faced after Hurricane Irma. Many students were left homeless, or roofless after the monster storm, but they all told stories of endurance. Not only were they displaced, having to share one building with PSVE, but the number of class hours were reduced in order to accommodate the shift in schedule from morning classes to evening sessions.

The students also had to manage without a laboratory for science experiments, but they persevered with the encouragement of their teachers, who themselves had their own challenging circumstances.

It was this determination that saw Laungani copping 11 grade ones, seven with straight ‘A’ profiles. He secured these top passes in Additional Mathematics, Biology, Chemistry, Electronic Document Preparation and Management, English A, Human and Social Biology, Information Technology, Mathematics, Physics, Social Studies, and Spanish. He copped an A in Cambridge Dutch, and a Grade II in CAPE Communication Studies.

He was also one of five graduates who received the Parent Teachers Foundation (PTF) Prize for excellence for attaining the school’s Honour Roll all five years while at Academy. This means that Laungani, along with Naomi Jankee, Jianling Nie, Habeebullaah Mohammed, and Kemilla Carty never received a failing grade from the time they entered the school in 2013 to their fifth form year.

The school’s principal, drs. T. Baly-Vanterpool lauded the Class of 2018 for achieving 100 percent school passes and 98 percent college passes. Students who attain Grades I – IV in at least six subjects are considered to have met the requirements to graduate with a high school diploma, while those scoring Grades I – III in the same number of subjects are deemed to have met the matriculation requirements into most colleges and universities in the Caribbean and further afield.

Baly-Vanterpool singled out the Department of Mathematics for special mention, as the school continues to excel in that subject, above the regional averages. She thanked her Management Team, the board of the foundation for Academic and Vocational Education (FAVE), as well as the teachers for seeing the students through the tough year. For the first time this year, Academy offered the subject Electronic Document Preparation and Management (EDPM) and eight of the 10 candidates received Grade 1, while two students received Grade 2. Physical Education and Sport was also offered for the first time this year, and both candidates (Naomi Jankee and Sidney Williams) attained Grade 1 with straight ‘A’ profiles.

According to Baly-Vanterpool, a number of students performed well in more than 11 subjects at one sitting. She was especially proud of the 13 CSEC candidates who did the CAPE Communication Studies during their fifth form year and achieved 100 percent passes. She singled out Tania Narine and Naomi Jankee, who ranked numbers one and two, respectively, among all the candidates, including those at CAPE, to write the subject at the May/June examinations. Both students received Grade 1.

Baly-Vanterpool told the graduates, “You must carry yourself with confidence, knowing that you have received a solid foundation at the Academy that will allow you to be successful wherever life takes you. Your future is bright. The world is waiting for you, your destiny has been chartered. Your future begins right here, right now.”

Speaking on the theme ‘Your future is determined by what you do today, not tomorrow’, alumnus Ruth Ward delivered an animated and captivating feature address using the plot of the movie, the Black Panther, to encourage the graduates on their next journey.

“Whatever you plan for your life, make sure that it is something that you want to do, and that the small daily decisions you are going to make, align with the plot for your life. The truth is, we cannot accomplish anything of great significance alone. We get to decide who we choose to walk with us for the next moment, the next season, and for the rest of our lifetime. We need mentors too, to direct us to fulfil our vision and an agent to examine the track record of our lives and to challenge our growth in the next chapter,” said Ward.

She encouraged them to choose who to take on their life’s journey, as those people will determine how far they go in life. Ward challenged the Class of 2018 to embrace being the first and show others that they, too, can be great leaders.

“You get to decide what kind of future you will have based on the decisions you make today…Decide wisely and make an amazing future,” she told the graduates.

UNESCO Secretary General, Ms. Marcellia Henry, dubbed the graduates “Overcomers”. She represented the Minister of Education, Mr. Wycliffe Smith. Henry echoed the sentiments of Mr. Roland Duncan, President of the FAVE board that the students showed great resilience in the aftermath of the hurricane to perform so well.

As Laungani stated in his valedictorian speech, “The Class of 2018 is incredibly strong…We slapped Irma right on the face and stayed strong.”

Of the 23 subjects St. Maarten Academy offers at the CSEC level, all students must write at least eight compulsory subjects, as well as the Cambridge Dutch, while CAPE students are required to complete at least eight course to attain an associate degree at that level.