PHILIPSBURG, Sint Maarten — The Department of Statistics estimates that in 2017 real GDP growth dropped by 8.4%. This decrease is not surprising given the anticipated negative impact of hurricane Irma on the economy of St.Maarten.

The largest gross value added declines in current prices were recorded for the industries
‘financial intermediation’ and ‘transport, storage and communication’, which decreased by
35% and 13%, respectively. In contrast, the ‘health and social work’ and ‘other community,
social and personal services activities’ industries recorded the largest gains in gross value
added namely 37% and 29%, respectively. Other major industries such as ‘trade’ and ‘hotels and restaurants’ also saw a drop in gross value added of 9% each.

Please note that these are preliminary figures and are subject to revision once the ongoing
National Accounts Survey is complete. This survey seeks to capture final data for the years
2016 and 2017 based on the final financial statements amongst the business sector. Final
estimates for 2016, 2017 and estimates for 2018 will be published in the second quarter of
2019. 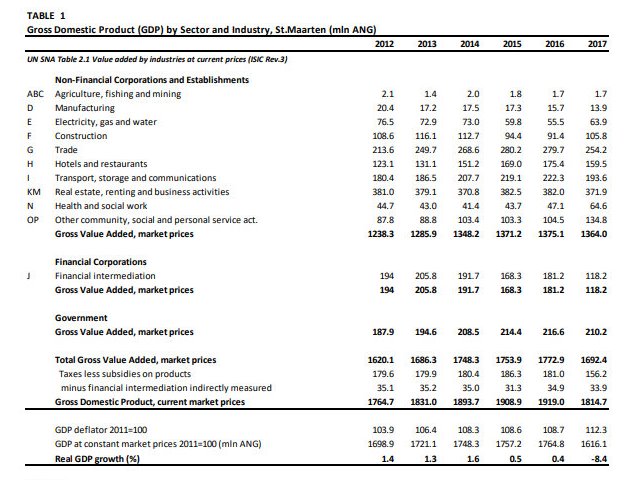 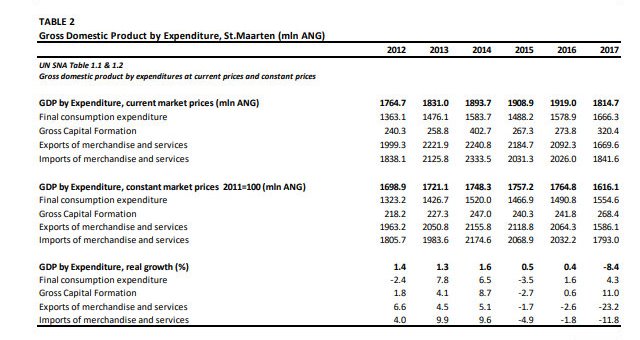