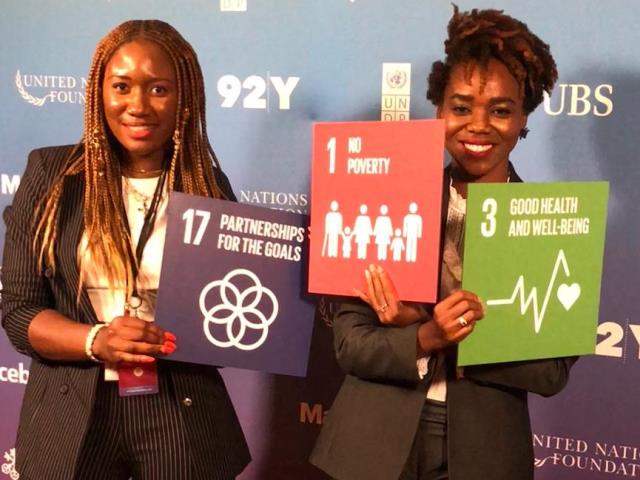 Brief round-up from our Creative Director Adedayo Fashanu about the success of the @gatesfoundation #goalkeepers2018 summit.

Hamer’s exceptional interpersonal skills, strong communication background and wide range of knowledge as it pertains to global social issues was the added edge to a successful TanTV coverage of the UNGA73.

Hamer and TanTV team covered various high-level meetings but focused primarily on platforms such as The Social Good Summit, SDG Media Zone and the entire Global Goals Week, Goal Keepers which was hosted by the Bill and Melinda Gate Foundation with Bill Gates as keynote speaker and other high-level side events.

The General Assembly is one of the six main organs of the United Nations, the only one in which all Member States have equal representation: one nation, one vote. All 193 Member States of the United Nations are represented in this unique forum to discuss and work together on a wide array of international issues covered by the UN Charter, such as development, peace and security, international law, etc. This past September, all Members met in the General Assembly Hall in New York for the annual General Assembly session.

The Sustainable Development Goals (SDGs), otherwise known as the Global Goals, are a universal call to action to end poverty, protect the planet and ensure all people enjoy peace and prosperity.

The 17 Goals build on the successes of the Millennium Development Goals or MDGs, while including new areas such as climate change, economic inequality, innovation, sustainable consumption, peace and justice, among other priorities. The goals are interconnected – often the key to success on one will involve tackling issues more commonly associated with another.

TanTV focused largely on the coverage of the SDG Media Zone, a platform constructed for journalists where individuals, government bodies and other stakeholders held intimate dialogue about how they are working to achieve the Sustainable Development Goals. The SDG Media Zone is heavily focused on the promotion, adaptation and inclusion of all 17 Sustainable Development Goals.

TanTV Studios aims to be the number one platform for covering social good and social impact focused stories globally.  The SDGs serves as a strong framework to achieve this vision. With a strong platform focused on global solutions, TanTV covers a niche like no other. The hashtag #TANTV4SDGS represents our commitment to Goal 17 of the SDGs to be a major media partner with the UN and other stakeholders covering stories that shed light to the Global Goals and platforms that exemplifies them all.

As world leaders gathered for the UN General Assembly, goalkeepers hosted the second annual Goalkeepers event in New York City on September 25 & 26. Speakers from around the world joined for this two-day event, sharing their stories, ideas, and challenges. The Goalkeepers Report took a detailed look at progress being made around the globe. This year, both the event and the report focused on youth population growth that will affect future world progress.

In the midst of this rapidly changing world, the Social Good Summit focused on where we’re headed. Held annually during the United Nations General Assembly week, the Summit unites a lively community of global citizens and progressive thought leaders around a common theme: #2030NOW. A dynamic exploration of the world we want to live in by 2030, the Social Good Summit will focus on how we can unlock technology’s potential to make the world a better place.

TanTV Studios is a niche audience content creation platform, technology and production service company inspired by storytelling relevant to culture. Just like their slogan, TanTV covers stories that inspires change around the world.

Journalist, writer and media entrepreneur, Adedayo Fashanu, serves as TanTV’s Founder and Creative Director. Fashanu is a media contributor whose work  has been published on Forbes, Huffpost and multiple other platforms. She covered Global Development and various initiatives as a White House Correspondent under the Obama Presidency. Fashanu has focused her journalism on telling stories of change and impact—touching on human rights, Women’s rights, global affairs and health, youth and development, climate change and so on. The need for a platform to be a voice of change is why she created TanTV.

“We are a platform with dynamic brands under our umbrella. Our focus is to cover stories and uplifting narratives using various media formats such as TV shows, magazines, pod-casts, events, program series and other fun avenues we can curate a message of impact through. We cover all fields but only from a social impact narrative and perspective”, said Fashanu.

As a Social & Community Enhancer and Cervical Cancer Advocate, Hamer focuses on assisting to develop and redevelop existing communities. Breaking through barriers, enhancing life experiences and creating personal advancement opportunities for people within communities as well as ensuring their lateral development.

Hamer was one of the Caribbean youth leaders selected by UNESCO / UNICEF to participate in the preparation process for the Small Island Development State (SIDS) 2014 global meeting by presenting youth voices at the regional and inter-regional preparatory meetings held in 2013. Through a series of regional conference in Jamaica, Fiji and the Seychelles, young people were able to discuss the challenges for SIDS from a youth perspective and provide proposals for the post 2015 development agenda (now known as the SDGs) and next strategy for sustainable development in SIDS.

In 2015, Hamer was invited to speak at the First UN Women Entrepreneurship Day Conference held at the United Nation’s Headquarter in New York. Her presentation focused on women’s health and its impact on economies.

Before leaving for the 73rd UNGA, Hamer completed an OCHA- United Nations Disaster and Coordination Assessment (UNDAC) mission which focused on Support to Hurricane Preparedness 2018. The mission was executed based on request by the Government of St. Maarten. Prior to UNDAC, she worked as a communication consultant with The United Nation Development Programme (UNDP) for their Building Back Better Projects on St. Maarten.

Hamer, under Amo’ek Media will continue to work in partnership with TanTV to cover social and community related topics while ensuring the continuous adaptation and upkeep of the Sustainable Development Goals (SDGs) through their various platforms and engagements.

As global advocates of peace, Hamer of Amo’ek Media and Fashanu of TanTV Studios serve as the faces of what this new generation of change makers and global citizens look like. A symbol of diversity, inclusivity, young women working together and being one of the many rare voices at the table. This is just the beginning of the duo, as they hope to combat stereotypes through their work of being voices for the SDGs and of global change.